It turns out that thieves are smarter than politicians give them credit for, and thanks to Proposition 47 that passed in late 2014, this is something California is learning the hard way.

Proposition 47 downgraded drug possession and some theft crimes to misdemeanors in order to reduce prison and jail populations, and on that score, the referendum was successful. 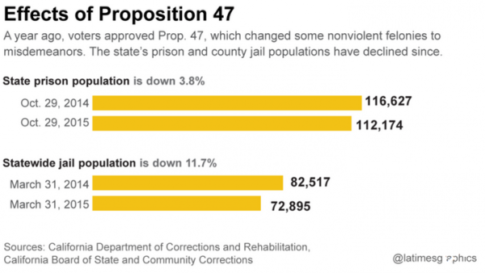 However, as with most other targeted laws, Proposition 47 had other unintended consequences that were not considered.

Now that any theft below $950 keeps the crime a misdemeanor, thus ending the possibility of charging those cases as a felony with a potential prison sentence, shoplifting has increased significantly, thus adding to the expense and headache for large and small retailers alike.

Safeway, Target, Rite Aide and CVS say shoplifting has increased at least 15 percent, and in some cases, has doubled since voters approved Proposition 47, and preliminary FBI crime reports show a 12 percent spike in larceny-theft since the measure was passed. In spite of that, Public Policy Institute of California researcher Magnus Lofstrom says it’s too early to determine if those numbers had anything to do with Proposition 47.

Well, it may be too early for Lofstrom to tell, but even the police are admitting it is no longer worth it to them to chase misdemeanor theft; “It’s not worth it to issue a citation or arrest a suspect who would likely be immediately released because of overcrowding” said Fresno Police Sgt. Mark Hudson.

Small business owner Perry Lutz is seeing first hand what is happening, as his HobbyTown USA is experiencing what he refers to as open season on the drones and other remote controlled toys he sells.

“It’s pretty much open season. They’ll pick up the $800 unit and just grab it and run out the door.”

It’s gotten to the point where thieves are even using calculators to make sure they aren’t committing a felony according to Sacramento County assistant district attorney Robin Shakely: “We’ve heard of cases where they’re going into stores with a calculator so they can make sure that what they steal is worth less than $950.”

As shoplifting rings send their people in with calculators, and are recruiting the homeless, low-end drug users, and illegal immigrants to bolster their reach, there are of course those that are pretending that nothing has changed.

One such person is Adam Gelb, director of the public safety performance project at Pew Charitable Trusts, who had this to say:

“The vast majority of offenders just aren’t fine-tuning their behavior that way. It’s hard to see how raising the level to $950 in California would touch off a property crime wave when raising it to $2,000 in South Carolina six years ago hasn’t registered any impact at all.”

We recommend that Adam grabs a coffee with Perry Lutz in order to do a quick reasonableness check on that theory. Or Gelb could just listen to LAPD Capt. John Romero, who sums it up perfectly:

“The law didn’t account for that. It did not give an exception for organized retail theft, so we’re seeing these offenders benefiting and the retailers are paying the price.”

Never mind the usual unintended consequences of government intervention, the sheer fact that Americans are ‘arbitraging’ the law in order to steal more – presumably just to get by – sheds some very bright lights on the state of America’s non-elites. It appear no longer matter of right versus wrong, but now more a cost-benefit analysis for the average shoplifter-in-need. For a nation that ius not used to hearing the word “no” – since that is such a micro-aggressive phrase – the lack of real punishment for taking what does not belong to you appears an incentive for more instant gratification. Thank goodness The War on Drugs is working…