It looks like the politics in Germany are set to go from bad to worse, as Reuters is reporting that the German government is planning on spending €93.6 billion by the end of 2020 on costs related to the refugee crisis. This is an interesting turn of events, as just last month German lawmakers were discussing banning welfare payments to refugees.

Reuters has the details:

Germany’s government expects to spend around 93.6 billion euros by the end of 2020 on costs related to the refugee crisis, a magazine said on Saturday, citing a draft from the federal finance ministry for negotiations with the country’s 16 states.

The figure is likely to stoke concerns, particularly among growing anti-immigration movements, on the impact of new arrivals on Europe’s largest economy which took in more than a million people last year, many from Syria and other war zones.

The numbers arriving have fallen this year, helped by a deal between the European Union and Turkey that was designed to give Turks visa-free travel to Europe in return for stemming the flow of migrants.

Officials based their estimates on 600,000 migrants arriving this year, 400,000 next year and 300,000 in each of the following years, the report said, adding that they expected 55 percent of recognized refugees to have a job after five years.

A spokesman for the finance ministry declined to comment on the figures but pointed to ongoing talks between the government and states, saying they would meet again on May 31 to discuss how to divide up the costs between them.

The report said that 25.7 billion euros ($29.07 billion) would be needed for jobless payments, rent subsidies and other benefits for recognized asylum applicants by the end of 2020.

The annual cost of dealing with the refugee crisis would hit 20.4 billion euros in 2020, up from around 16.1 billion euros this year, the report said.

It appears as though the political leaders are not only pivoting from recent comments around welfare assistance, but also completely ignoring the glaring shift in the political landscape that is occurring right under their ivory tower noses, to mix and match metaphors, by moving forward with massive spending programs to assist immigrants anyway. With significant taxpayer money being spent on welfare, job assistance, and other subsidies for an influx of roughly 1.9 million refugees over the next five years, the next round of opinion polls should be interesting to say the least. If recent history is any guide, that anti-immigrant AfD party (which also happens to be staunchly anti-establishment) will see its most favorable results yet. 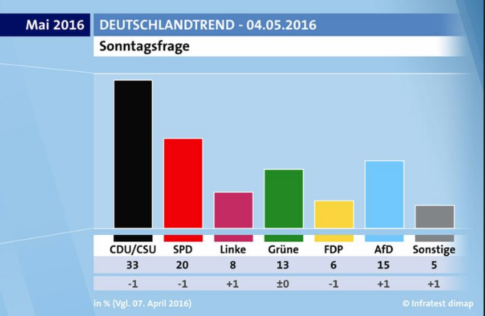