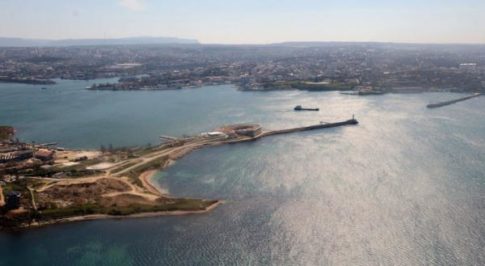 When Crimea’s secession to Russia was accepted by Putin, the logical next phase of the process was to cut off Crimea’s reliance on Ukraine for energy, and fully integrate it into Russia’s supply network. That phase has now been completed, as the fourth and final line supplying electricity from mainland Russian to the Crimean peninsula has been completed according to RT…

The energy bridge connects the mainland with the peninsula with a series of undersea cables running across the Kerch Strait. The new line will provide Crimea with total power supply of 800 megawatts a day that aims to satisfy the peninsula’s demand combined with its own capacity. The overall cost of the construction totaled 47.3 billion rubles ($720 million).

Crimea will have enough electricity to meet the holiday season, when tourists significantly boost the population and provide the peninsula with a major source of revenue, according to Russian Energy Minister Alexander Novak.

This will be a considerable relief following last November’s disaster when local authorities had to declare a state of emergency after all four Ukrainian power lines providing electricity to the peninsula were blown up, leaving Crimea in total blackout.

Let me congratulate you all on the completion of this energy bridge linking Crimea to the rest of Russia.

The energy bridge across the Kerch Strait was a technically very difficult project and you used the very latest technologies in this work. The work itself proceeded at a truly rapid pace with the result that we have ended the energy blockade of Crimea in a very short time. I have no doubt that we would succeed in breaking through any kind of blockade, should anyone take it into their heads to test us.

I want to thank the engineers and the workers, everyone who took part in the project, for their dedicated labour and conscientious and highly responsible approach to the job. There is no need to tell you how important this task was for the country, and you have done an outstanding job of it.

A meeting on energy supplies to #Crimea: completing the construction of the energy bridge https://t.co/ziWvAT1a2upic.twitter.com/oidzZlEGk2

The next phase to tie Crimea and Russia together will be a $3.2 billion project to build a road and rail bridge across the Kerch Strait. The 12 mile structure will be the longest of its kind in Europe, and is scheduled for completion at the end of 2019 according to Reuters.

While the complete absorption of Crimea into Russia continues, we once again remind everyone that along with Crimea, Russia inherited potentially significant offshore resources as well. The exploration of which is undoubtedly part of Putin’s future plans once all of the infrastructure is complete.

1 thought on “Russia Completes Energy Bridge With Crimea, Warns Against Any Future Interference”