– Another US-Sponsored Coup? Brazil’s New President Was An Embassy Informant For US Intelligence:

When we explained yesterday the next steps in the Dilma Rousseff impeachment process, we predicted that “Brazil’s problems are only just starting” for several reasons, chief among them being that the man who is now Brazil’s next active president, Michel Temer, is almost as unpopular as the president he is replacing, and is stained by scandals of his own. 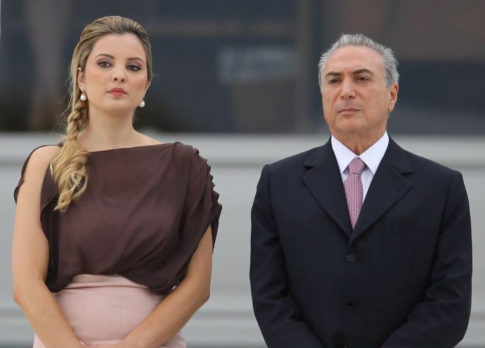 As AP noted, “Michel Temer, who hasn’t won an election on his own in a decade, is famed as a backstage wheeler-dealer, and his critics say he’s leading the plot to replace his boss, embattled President Dilma Rousseff.” And with Temer now the acting president, the AP frames the big question as follows: can he avoid ouster himself.

Among his documented transgressions, he signed off on some of the allegedly illegal budget measures that led to the impeachment drive against Rousseff and has been implicated, though never charged, in several corruption investigations.

Best was AP’s snide addition that “the son of Lebanese immigrants, Temer is one of the country’s least popular politicians but has managed to climb his way to the top, in large part by building close relationships with fellow politicians as leader of the large but fractured Brazilian Democratic Movement Party.”

However, as much as we would like to believe that Temer is simply the real world version of Frank Underwood, there is a much simpler explanation for the 75-year-old’s dramatic ascent to the peak of Brazil’s power elite.

As it turns out, the Temer presidency may be nothing more than the latest manifestation of the US state department’s implementation of yet another puppet government. We know this because earlier today, Wikileaks released evidence via a declassified cable that Brazil’s new interim president was an embassy informant for US intelligence and military.

Brasil’s new president #Temer was an embassy informant for US intelligence, military https://t.co/3l2eUdiqvypic.twitter.com/IUuUgHYd1e

According to the whistleblowing website, Temer communicated with the US embassy in Brazil and such content would be classified as “sensitive” and “for official use only” (link). 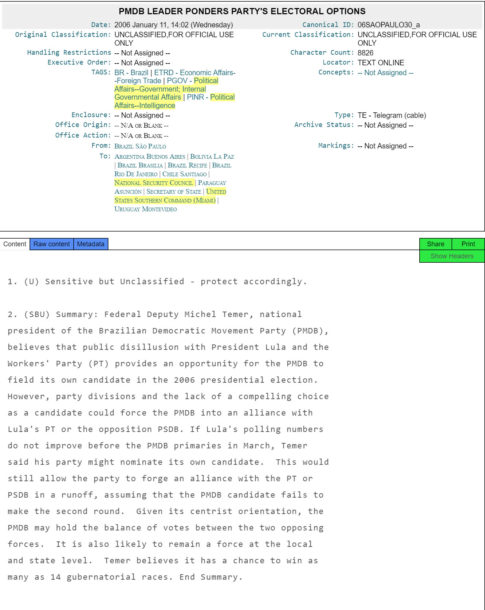 Wikileaks brought attention to two cables, one dated January 11, 2006, the other June 21, 2006. One shows a document sent from Sao Paolo, Brazil, to – among other recipients – the US Southern Command in Miami. In it, Temer discusses the political situation in Brazil during the presidency of Luiz Inácio Lula da Silva.

Regarding the 2006 elections, when Lula was re-elected, Temer shared scenarios in which his party (PMDB) would win the elections.  He declined to predict the race, however, but said there would be a run-off and that “anything could happen.”

Temer said the PMDB would elect between 10 and 15 governors that year, and that the party would have the most representatives in the Senate and thus the House of Representatives. This would mean that the elected president would have to report to PMDB rule.  “Whoever wins the presidential election will have to come to us to do anything,” Temer reportedly said.

As a reminder, the last time the US instituted a puppet government, was in 2014 when in yet another “bloodless coup”, the president of Ukraine was overthrown and replaced with a billionaire oligarch, a scenario comparable to the one in Brazil.

We don’t have to remind readers that as a result of the Ukraine coup, relations between the US and Russia are multi-decade lows, the cold war is back and – as of yesterday, so is the nuclear arms race. We are curious what the consequence of yet another US state coup will be, this time in Latin America’s largest country.

2 thoughts on “Another US-Sponsored Coup? WikiLeaks: “Brazil’s New President Temer Was An Embassy Informant For US Intelligence, Military””