I’ve said many times that if you want to protect your financial assets physical gold and silver are (in my opinion) the place to be (and especially silver, which is still my favorite “investment”).

Only physical gold and silver are real, everything else will (in my opinion) turn out to be an illusion.

Of course you’ll need to prepare (for the greatest financial collapse in world history) on all levels: Water, food, survival gear, etc.

Just buying gold and silver will not nearly be enough, but it’s a good start.

– Stand Aside JP Morgan, A New Player In The Silver Market Has Arrived:

The days of JP Morgan controlling the silver market may be numbered as a new player in the silver market has arrived.  For the past several years, JP Morgan held the most silver on a public exchange in the world.  While the LBMA may hold (or did hold) more silver, their stockpiles are not made public.

Regardless, JP Morgan held the most silver at nearly 74 million oz (Moz) in its warehouse, up until recently.  Over the past two months, JP Morgan’s silver inventories have fallen nearly 7 Moz to 67.1 Moz today: 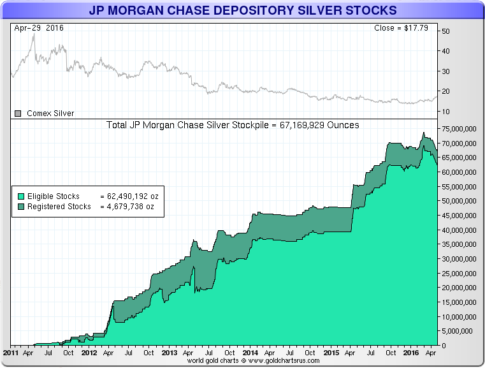 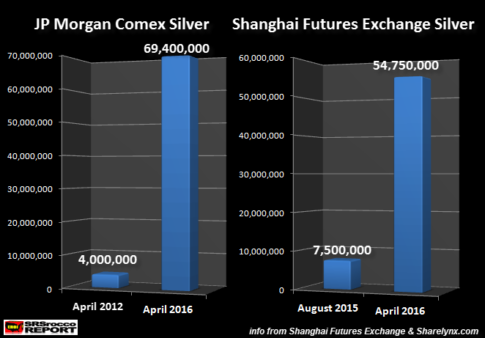 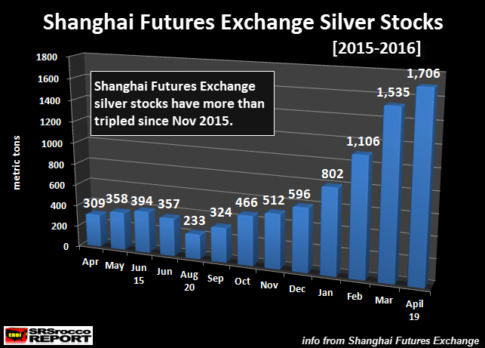 As we can see from this chart dated April 19th, the Shanghai Futures Exchange more than tripled their silver inventories since November 2015.  What is even more interesting is the continued buildup over the past two weeks.  Here is an updated chart based on data for May 3rd: 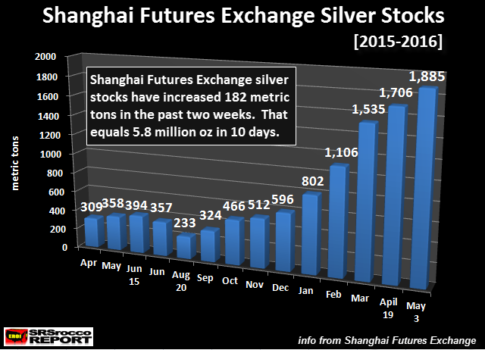 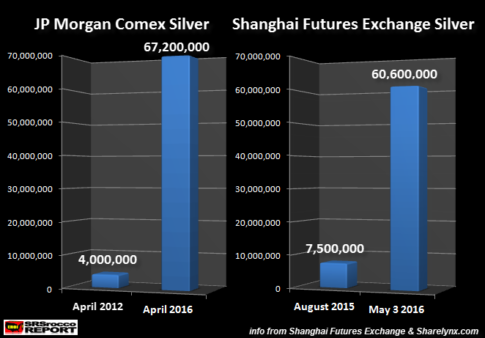 When the CME Group published the recent silver inventory change on the Comex yesterday, nearly 4 Moz were transferred from the Registered to Eligible Category.  The majority of the transfer came from the CNT Depository at nearly 3.5 Moz with 485,325 oz from HSBC: 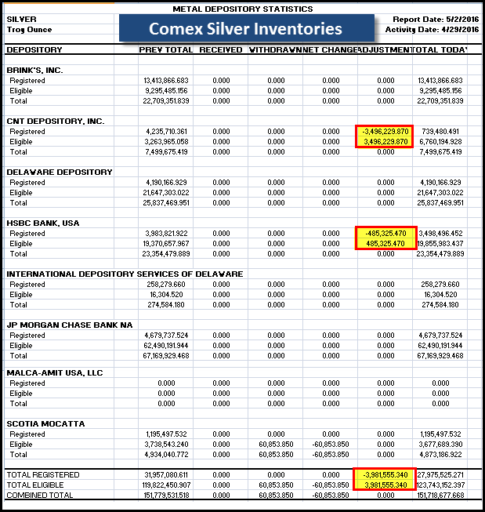 Some analysts say these transfers really don’t mean much if the overall inventories stay the same.  That may be true, but there was some reason the CNT Depository transferred 3.5 Moz of silver from their Registered Inventories to the Eligible.

That being said, the Chinese are adding a lot of silver to their Shanghai Futures Exchange warehouses.  The build from 7.5 Moz in August 2015 to over 60 Moz of silver in the beginning of May puts JP Morgan’s four-year inventory growth to shame.

It will be interesting to see how the exchange inventories and price action of silver play out over the next several months.

1 thought on “Stand Aside JPMorgan, A New Player In The Silver Market Has Arrived”