“Confused? Don’t be: it’s all part of the new normal recovery, and don’t forget the spin: don’t think of its as 12,000 highly paid engineers and tech workers fired, think of it as 12,000 brand spanking new waiters and bartenders.” 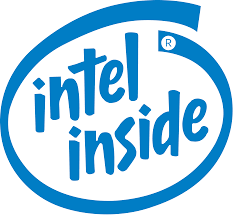 There were some rumors reported late last week that the world’s biggest chip maker was about to fire a major portion of its workforce. Moments ago the company confirmed these rumors, when it reported that it was firing a whopping 11% of its entire workforce, laying off a massive 12,000 workers.

Intel Corporation today announced a restructuring initiative to accelerate its evolution from a PC company to one that powers the cloud and billions of smart, connected computing devices. Intel will intensify its focus in high-growth areas where it is positioned for long-term leadership, customer value and growth, while making the company more efficient and profitable. The data center and Internet of Things (IoT) businesses are Intel’s primary growth engines, with memory and field programmable gate arrays (FPGAs) accelerating these opportunities – fueling a virtuous cycle of growth for the company. These growth businesses delivered $2.2 billion in revenue growth last year, and made up 40 percent of revenue and the majority of operating profit, which largely offset the decline in the PC market segment.

The restructuring initiative was outlined in an e-mail from Intel CEO Brian Krzanich to Intel employees.

“Our results over the last year demonstrate a strategy that is working and a solid foundation for growth,” said Krzanich. “The opportunity now is to accelerate this momentum and build on our strengths.

“These actions drive long-term change to further establish Intel as the leader for the smart, connected world,” he added. “I am confident that we’ll emerge as a more productive company with broader reach and sharper execution.

These changes will result in the reduction of up to 12,000 positions globally — approximately 11 percent of employees — by mid-2017 through site consolidations worldwide, a combination of voluntary and involuntary departures, and a re-evaluation of programs. The majority of these actions will be communicated to affected employees over the next 60 days with some actions spanning in to 2017. Intel expects the program to deliver $750 million in savings this year and annual run rate savings of $1.4 billion by mid-2017. The company will record a one-time charge of approximately $1.2 billion in the second quarter.

As we asked rhetorically last week when the rumor first broke:

Confused? Don’t be: it’s all part of the new normal recovery, and don’t forget the spin: don’t think of its as 12,000 highly paid engineers and tech workers fired, think of it as 12,000 brand spanking new waiters and bartenders.

It was not immediately clear if INTC was boosting its buyback,but we do know that Intel also boosted its buyback both sequentially and annually, repurchasing $793 million in stock in the first quarter.

We also know Intel’s just announced earnings beat on the bottom line as EPS came in at $0.54, above the $0.49 expected.

Had INTC used the historical tax rate, it would have, surprise, missed.

Which is also why the company’s GAAP (not to be confused with its non-GAAP) revenue of $13.7BN missed expectations.

Worse, INTC just cut its outlook, predicting revenue of $13.5 billion, plus or minus $500 million, for the Q2, about $700MM below consensus estimates.

And then INTC also cut virtually every full year forecast:

The stock, inexplicably, is down despite the company cutting over 10% of its employees. 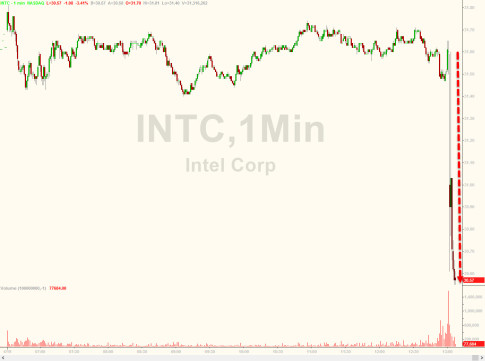