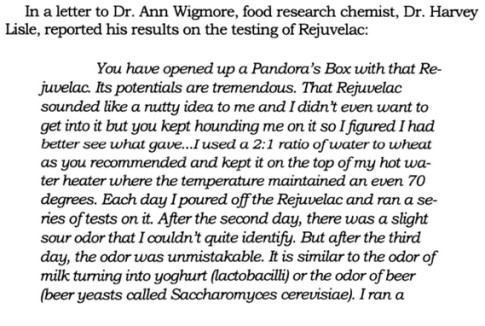 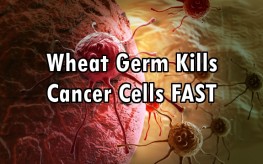 “Avemar (MSC) is a nontoxic fermented wheat germ extract demonstrated to significantly improve the survival rate in patients suffering from various malignancies. We investigated its effects in human HL-60 promyelocytic leukemia cells. After 24, 48, and 72 h of incubation, Avemar inhibited the growth of HL-60 cells with IC50 values of 400, 190, and 160 microg/ml, respectively. Incubation with MSC caused dose-dependent induction of apoptosis in up to 85% of tumor cells. In addition, Avemar attenuated the progression from G2-M to G0-G1 phase of the cell cycle and was also found to significantly reduce the in situ activity of ribonucleotide reductase, the key enzyme of de novo DNA synthesis. We conclude that Avemar exerts a number of beneficial effects which could support conventional chemotherapy of human malignancies.”

The Memorial Sloan Kettering Cancer Center says that fermented wheat germ extract (WGE) is not only anti-cancerous, but immune-boosting, as well as helpful in treating diabetes, obesity, and improves heart health. This natural supplement can be taken before, after, and during chemo and radiation treatments to make them more effective, but why not just ditch chemo and radiation altogether and use one of the numerous other natural methods to clear the body of cancerous cells:

Avemar is a naturally fermented wheat germ extract that, so far, has exhibited positive effects against all forms of cancer cell lines tested.

Whether tumor cells proceed to replicate, grow, and eventually spread throughout the body is determined by enzymatic activity and their accessibility to various nutrients. For years, pharmaceutical companies have also focused their efforts in this arena in an attempt to find cures for various forms of cancer. One of their top priorities (and one area with the greatest potential) has always been to uncover compounds that inhibit glucose metabolism in tumor cells.

Every form of cancer cell utilizes glucose at rates 10 to 50 times higher than that of normal healthy cells (a well-known phenomenon referred to as “the Warburg effect”). Unlike normal, healthy cells that utilize glucose primarily for energy, tumor cells use glucose to increase the production of nucleic acids (necessary for the formation of additional RNA) and various proteins (needed for the cancer to continue to grow).

In simple terms, cancer cells have only one function: proliferation. To achieve this function, cancer cells need large amounts of glucose that they can convert into building materials for new cells. As the tumor grows, more and more glucose is consumed. Two things occur as a person’s glucose is diverted to the cancer. First, fatigue sets in. Second, since less glucose is converted to necessary fats and protein, the body begins to waste away (a process known as cachexia).

One of the main problems with conventional cancer therapies such as chemotherapy and radiation is that they are non-specific, so they destroy normal, healthy cells along with disease-ridden ones. Thus, the attempt to kill the cancer cells often kills the patient as well.

Avemar, however, works through several different mechanisms. One of its most unique benefits, however, is its ability to inhibit glucose metabolism in cancer cells.

Research at UCLA has demonstrated that Avemar reduces glucose flow into cancer cells—which inhibits their ability to produce additional nucleic acids and subsequently reduces their proliferation. In the presence of Avemar compounds, cancer cells begin to utilize the available glucose to produce substances that actually inhibit cell division and stimulate programmed cell death (apoptosis) within the tumor.

As one report explains, decreased glucose consumption of the tumors results in a harmonizing of the patient’s metabolism—as well as weight gain, even in people with advanced cancers. As a result, patients treated with Avemar also have improved tolerance for surgery, radiation, and chemotherapy. Further, Avemar achieves these results without creating any toxicity or damage to normal, healthy cells. As a result, patients have less fatigue, pain, and depression, and experience an increase in appetite that can help them regain lost weight.

Avemar also assists the immune system’s ability to identify and destroy cancer cells. The cells responsible for this are a specialized type of white blood cell called natural killer (NK) cells. However, cancer cells can evade NK cells by masking their outer membrane with a special substance that the NK cells recognize as “normal.” Avemar suppresses the release of this masking substance—allowing NK cells to better target and kill the cancer cells.

Avemar also can protect cells against effects caused by conventional therapies. For instance, following radiation and chemotherapy, it has been demonstrated that Avemar was successful in restoring the bone marrow’s ability to produce red blood cells.

One of the life-threatening complications of radiation and chemotherapy is a condition called febrile neutropenia. It occurs when the therapy significantly reduces the number of white blood cells (neutropenia). White blood cells are needed to fight pathogens, and patients are extremely vulnerable to infections (and resulting death) during this period when cell counts are at their lowest. An indicator of the seriousness of the infection is the presence of a fever (the febrile part).

In all of the studies where Avemar was used in conjunction with conventional therapies, not only were those therapies significantly more effective, but the patients experienced considerably less therapy-related side effects. Both the frequency and severity of common side effects like nausea, fatigue, weight loss, and depression were reduced. Additionally, their immune systems recovered more rapidly.

Avemar’s safety has been studied extensively in cell lines, animals, and humans, and no adverse effects have been identified. When the data were reviewed by a panel of doctors and toxicologists, it was their opinion that Avemar has a toxicological profile similar to that of bread. (Though the product is made from only the germ part of wheat, the manufacturer has included a caution for people who are sensitive to gluten.)

Given the existing scientific research, there’s absolutely no reason that Avemar shouldn’t be used with every single cancer patient—particularly in those with severely impaired immune systems and those who are undergoing conventional therapies. I encourage you to share this information with anyone you know battling cancer. It could save a life.