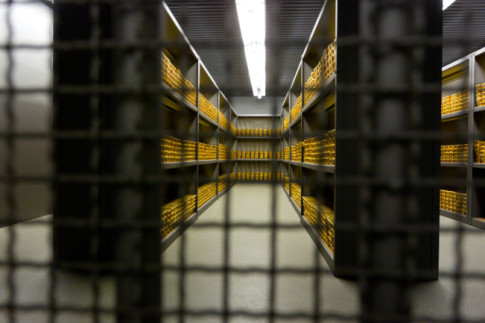 – The Coming Revaluation of Gold:

The current melt-down of the world’s debt bubble is likely to continue in the course of the next months. The secular trend to expansion of credit has morphed into contraction and liquidation. It is my opinion that the new trend is now established and no action by any of the Central Banks (CB) that issue reserve currencies will do anything at all to reverse that trend.

Sandeep Jaitly thinks that the desperate reserve-issuing CBs – the US Fed, the ECB, the Bank of England and the Japanese CB – may resort to programs of QEP, by which he means “Quantitative Easing for the People”. This quantitative easing will mean putting money into the hands of the populations by rebates on taxes, invented make-work schemes or any other excuse to furnish the people with the famous “helicopter money”, to get them to spend.

As the present crisis deepens and given our experience with the way our so-called “economists” think, we can reasonably expect such programs to be launched. Nevertheless, the present trend of world economic contraction will not be reversed by any ad hoc program. The world’s expectations – positive for growth since WW II – have turned negative. This is an event of such magnitude that no “QE” will have any effect upon the final outcome: debt collapse.

The growing fear in the world’s markets arises from the recognition on the part of indebted corporations and individuals that their debt burdens are increasing due to devaluations of their national currencies. International investors are attempting to reduce their exposure. “Hot money”, invested in countries which offered higher interest rates, now wants to go home. In recent years of bonanza, foreigners borrowed some $11 trillion dollars, in various Reserve Currencies, to invest in their own countries. Of this total, it is calculated that about $7 trillion of those dollars are denominated in dollars. The debtors are now attempting to pay-off their dollar loans, and this has the effect of lowering the value of their own currencies with respect to the US Dollar, thus aggravating the situation. There is a loss of confidence in national currencies, producing Capital flight to the rising Dollar, because the countries that issue those currencies are no longer able to maintain export surpluses against the reserve-issuing countries, and are thus unable to increase reserves and are actually losing these reserves. The export-surpluses are disappearing in the “rest of the world” because the reserve-currency countries, plus China, are in an economic slump (essentially attributable to excessive debt) and are reducing their consumption of imports, thus reducing the exports of the export-surplus countries.

The loss of Reserves on the part of the countries which depend on export-surpluses for economic health makes the accumulated debt burden in the world increasingly unsustainable; investors around the world are worried that some of their assets (which are actually debt instruments, that is to say various sorts of promises to pay) may turn out to be duds, and they are trying to find ways to protect themselves – and Devil take the hindmost!

Whatever expedients are implemented, the final outcome of the unprecedented economic contraction in the world will have to be the revaluation of gold reserves, as desperate governments of the world resort to gold to preserve indispensable international trade. The revaluation of gold reserves held by Central Banks will be the only alternative for countries seeking to retain a minimum of international trade to supply their economies, whether they are based on agriculture, on manufacturing or on mining.

The amount of gold held by any particular country will not be the important factor in maintaining operating economies, because even a small amount of gold will be sufficient for that purpose; the reason being, that gold coming into newly rediscovered importance, no country will be able to maintain either trade surpluses or trade deficits. The first case would imply that other countries are sending their precious gold to the surplus export countries, but the scarcity of gold and its vital importance will not permit other countries to lose their gold to the (would-be) surplus-producing countries. In the second case, the trade-deficit countries would immediately correct their activity by devaluing their currencies ipso facto, rather than continue to lose their precious gold to cover their trade-deficits: devaluation would put an immediate stop to the excess of imports over exports. Governments resorting to credit-creation to fund their deficits would find themselves limited to balanced budgets; otherwise, their budget deficits funded by credit-creation would spill over into excessive imports and the consequent necessity for immediate devaluation of their currency.

Only gold-producing countries will be able to run trade deficits, limited to the amount of gold they produce to pay for such deficits.

Thus, the revaluation of gold will have the beneficent effect of restoring the world to a healthy condition, lost a century ago, of balanced trade and balanced national budgets.

The discipline of gold as Reserves backing currency at a revalued price will restore order to a world that has refused to adopt the necessary discipline until forced to do so in the desperate situation now evolving, where there will be no other alternative but to accept the detested fiscal and financial discipline imposed by gold.

We do not know the true amount of gold held by the world’s central banks, because it is a closely held secret. However, we need not know that figure. Whatever gold there is in CB vaults will be sufficient, for the reasons we have given.

Nor do we know at what price, in dollars, the price will be set, or how it will be set. However, given the truly astronomic amounts of debt in existence, a very high price will be necessary to “liquefy” i.e. make payable remaining debt, whatever the amount remaining after the purge which is now in process. The very high price of gold will mean that all debt instruments will be subject to large losses in terms of gold value. The revaluation of gold will reduce the weight of the present debt overhang upon the world.

The revaluation of gold does not mean that prices of goods and services will rise in tandem with the higher price of gold. Established prices will by and large remain the same prices that existed before the revaluation. However, prices will have to re-adjust to reflect the new economic realities. Many goods that we have taken for granted will disappear, as their artificial cheapness vanishes. 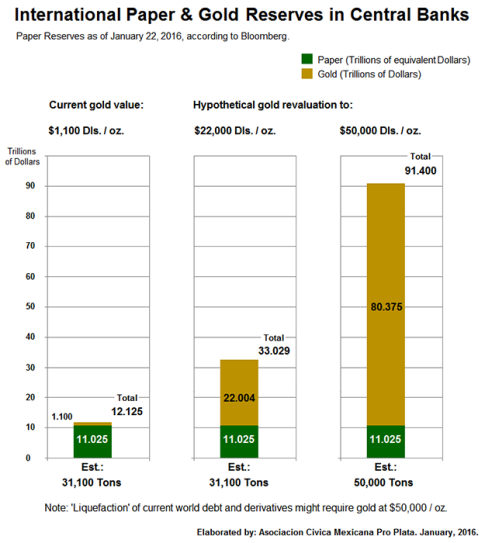 Once the world’s currencies are “gold-backed”, then the gold held by individuals, trusts or corporations will cease to lie lifeless in stocks of gold. All gold will have become money and will spring to life in furthering economic activity: the revaluation of gold by Central Banks will also revalue, simultaneously, the 151,890 tons of gold which are thought to be in private hands at present – 183,000 tons total, minus 31,110 tons held by Central Banks = 151,890 tons in private hands.

For China, the revaluation of gold means an end to the great export trade of Chinese manufactures, with the consequent inevitable, and surely very wrenching re-ordering of its economy. Perhaps this explains why the Chinese government has been urging the population of China to purchase gold.

China, which is rumored to have far more gold in its Reserves than it says it does, might have the opportunity to lend say, 50 tons of the yellow metal to each of 50 hard-hit countries, for a total of an insignificant 2,500 tons out of its large stash. In return, the recipient countries would place Chinese on the Boards of their Central Banks and as supervisors in their National Treasuries; in addition, China might obtain privileges to invest in the extraction of scarce natural resources or in agriculture – China has a huge population that will require establishing sources of food. Nothing comes without a price, and “he who has the gold makes the rules”. The Chinese are well-known as consummate merchants and as people who know how to live unobtrusively in foreign countries. China’s influence may extend around the world, with the world’s return to gold-backed currencies.

For the US, the revaluation of gold means an end to its ability to obtain any goods it desires, in any quantity, in any place, at any price by simply tendering today’s mighty fiat Dollar in mock-payment, in exchange for those goods. The US economy will have to suffer a huge and also painful, wrenching adjustment to its new situation in a different world, where balanced trade and balanced budgets are relentlessly imposed by the new status of gold as international money. On the positive side, US manufacturing will immediately spring to life to supply the US market; employment and incomes will surge with the rebirth of US manufactures.

Once all currencies are “gold-backed” by revalued gold reserves, then gold is once again the international money, and the Dollar becomes nothing more than the national currency of the US, as quantities of gold become the international means of settling trade. We need not worry ourselves about how this will take place, because that it will happen is a certainty. All prices of goods and services around the world will really be gold prices, since all currencies will be redeemable at sight, in gold.

Such is the significance of the coming revaluation of gold.