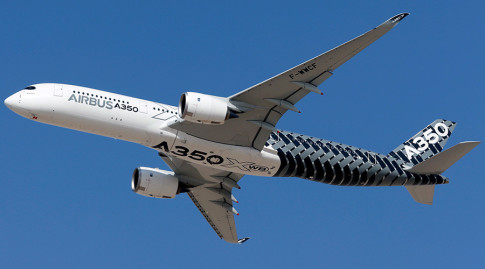 – Iran to buy 114 Airbus planes, but no deals with Boeing:

Iran plans to buy 114 civil aircraft from European manufacturing giant Airbus – Boeing’s major rival. The deal, reportedly worth over $10 billion and set to be signed next week, comes as Tehran emerges from years of international sanctions and isolation.

Transport Minister Abbas Akhoundi said Iran currently has just 150 operational planes out of a fleet of more than 250, AFP reported. He added that Tehran is seeking to modernize its ageing passenger plane fleet as soon as possible, as it has been hit by a shortage of parts due to trade bans.

The first batch of new planes is set to arrive in Tehran by March 21, the minister said.

Akhoundi noted that the deal “will be signed between Iran Air and Airbus” when President Hassan Rouhani is in Paris on Wednesday, Iranian media reported. The trip follows the implementation of a long-awaited nuclear deal with world powers that curbs Tehran’s atomic activities in exchange for the lifting of stifling economic sanctions.

“Iran needs $250 million in new investments for purchasing its aviation systems and foreign companies operating in this sector, except the ones which are affiliated to the Zionist regime, could make investments in Iran,” Akhoundi said, according to IRNA news agency.

Ali Abedzadeh, chairman of the Iran Civil Aviation Organization (IAIO), said Tehran needs at least 500 commercial aircraft over the next 10 years, of which 300 should be widebody twin-engine jet airliners.

“The IAIO is willing to ink cooperation agreements with foreign firms to modernize the fleet. The organization welcomes foreign direct investment to serve its expansion,” he said on Sunday, according to Fars news agency.

Tehran is also interested in negotiating with Boeing. Iran currently has no deals in place with the American manufacturer “because of problems with negotiating with the US,” Akhoundi said on state television, Reuters reported.

An Iranian official attributed the US company’s absence at the Tehran Aviation Summit to the US Treasury Department’s possible refusal to give it permission to attend the gathering.

Speaking to Tasnim news agency, the secretary of the aviation summit, Ahmad-Reza Bayati, said Boeing may have failed to obtain official permission to participate in the summit.

Bayati reportedly said that the US manufacturer may need to put pressure on the US administration in order not to lag behind other corporations.

Iranian assets worth about $107 billion have been frozen overseas since the US and the EU issued economic sanctions against Tehran nearly four decades ago. An executive order revoking sanctions imposed by Washington was issued by US President Barack Obama. However, the US has so far lifted only “secondary sanctions” against Iran, which means American citizens are still banned from trading with the country, according to the US Department of Treasury. Although some 400 Iranian companies and individuals are to be removed from the sanctions list, 200 others will remain blacklisted.

Sanctions against Tehran were officially lifted on January 16, after the UN nuclear watchdog said Iran had fulfilled all of the measures required under its deal with six world powers.

Iran will get access to $32 billion of unfrozen assets as part of the lifting of Western sanctions, AFP cited Iranian Central Bank Chief Valiollah Seif as saying earlier this week. It’s hoped that re-establishing links to the world’s financial networks will make it easier for foreign companies to take part in privatizations in Iran. Following the lifting of sanctions, most Iranian banks have been allowed to reconnect to the SWIFT financial-transactions system.