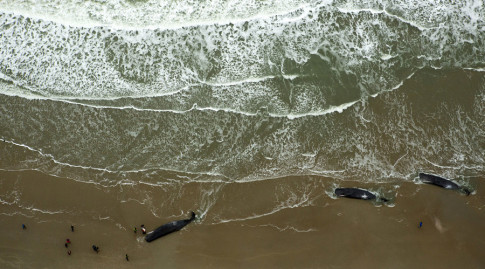 It’s been a devastating week for the whale population across Northern Europe as 12 whales died on or off the coast of the Dutch island of Texel and the German islands of Wangerooge and Helgoland this week.

Five sperm whales washed up on the shores of Texel on Tuesday night.

Attempts were made to save them but had to be discontinued during the night due to weather conditions which made it impossible to move the giant mammals.

Marian Bestelink, a spokeswoman for the Dutch Economic Ministry, said: “Experts found that the whales died during the night.”

“We are going to investigate why they beached and then we will remove them,” Bestelink said Wednesday as cited by AFP, adding that the process would probably take several days.

The beaching of whales has always been a problem for Texel due to its geographical location, according to Gizmodo.

The water in the North Sea is extremely shallow which doesn’t allow the whales to fully make use of their sonar and so they can get lost or exhausted and wash up on a beach.

The clean-up operation has already begun on the island of Wangerooge.

“These whales have quite simply made a mistake,” Thilo Maack, a marine biologist with Greenpeace, told German TV. “They didn’t pass Scotland but turned off into the North Sea. That happens sometimes.”

It is the first time that so many whales have been beached in German waters, Maack added.

Before being taken away, the carcasses first need to be dissected to prevent explosion.

A buildup of gases in the whale’s body could cause the whale to explode if it is left lying there too long.

The warmer the temperature, the higher the danger that the corpse might explode, as heat accelerates the decomposition process.

It is unlikely that the sperm whale bodies on the North Sea coasts might rupture, experts told DW News. “It’s not that warm at the moment,” says Mathias Heckroth, who works for the conservation and research organisation Mellumrat.

Sperm whales are the largest-toothed whales on earth. Male sperm whales are usually larger than the females. They can measure up to 20 metres long and weigh over 50 tons.