Earlier today, Goldman’s global macro strategist team led by Noah Weisberger released a report titled “Markets do not “Take it Easy” to start the year”, which had one very disturbing slide, i.e., “Exhibit 8.” – disturbing, because it showed that according to Goldman’s Current Activity Indicator, the US was effectively in recession; certainly disturbing enough for us to immediately tweet it with just one comment: “Oops”:

In case it is not readily visible, here it is again:

Exhibit 8: Our market-based US growth risk factor is at post GFC lows 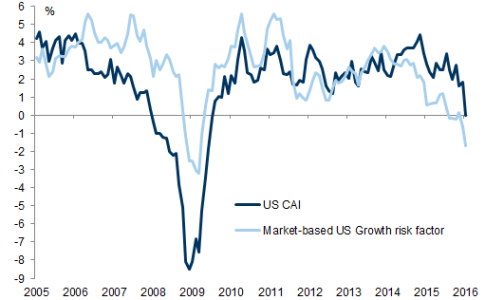 This was the accompanying Goldman commentary:

Although EM assets remain in the cross-hairs – and the outlook there remains tenuous in spots – growth concerns have impacted the market’s view of US and European growth as well, pushing our market-based measure of US growth risk to new post GFC lows (see Exhibit 8).

To our amusement, perhaps in response to the aforementioned “Oops” tweet, moments ago Goldman issued a retraction and a correction to the report, with the following explanation:

Exhibit 8 has been corrected. No other changes.

Corrected to what? This: 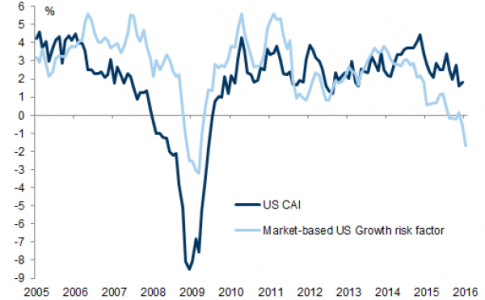 And just like that the recession, if only according to Goldman’s Current Activity Indicator, was mysteriously wiped out.

Surely there was “nothing nefarious” in that correction and it was only due to “technical” reasons, although one wonders just how the CAI line was at 0 in one chart, and the surprisingly reverted back to last month’s level unchanged, with no data point for the most recent date.

We doubt we will get an answer, although now expect Goldman to once again retroactively revise what the components of its CAI are, just to “goalseek” the narrative with one where the most important US bank does not suddenly admit a recession has arrived.

Of course, the other problem, namely that the “market-based US growth risk indicator” suggesting that the US is now in a deep recession remains… at least until that too is revised away.