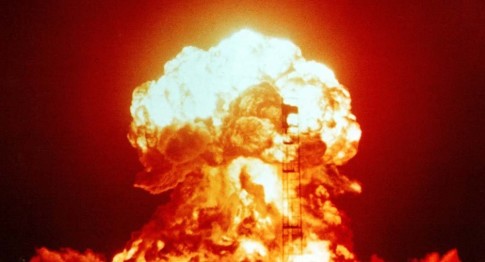 – Das Ist Impossible! Germans Are Shocked That US Nukes Would Also Hit Them:

German politicians and media figures reacted with shock to the release of the 1956 first strike nuclear targeting plan in the US, which also included somewhat imprecise targeting.

German politicians and Twitter users reacted with shock to the release of a US plan for a nuclear first strike, which alongside Moscow, would also hit Berlin, then divided into the capital of East Germany and an independent city under French, British and US military occupation.

In the plan, Moscow, Berlin, Warsaw and Beijing are targeted for “systematic destruction” by US nuclear bombs in a first-strike scenario. The targeting includes the cities’ civilian population.German concerns about Cold War-era security go back to the 1962 Spiegel scandal, which revealed that West Germany had few real plans to defend itself in case of Soviet invasion, and that construction of military bases was often linked to corruption.

Stefan Korner, head of the Pirate Party, was shocked to learn of the plans:

“​US Plan in the Cold War: nuclear bombs on eastern Berlin? With friends like these, who needs enemies?”

So was Franz Winterberg, a political consultant and member of the ruling Christian Democrat Union party:

“​The US wanted to hit 91 targets in East Berlin in case of an emergency. Back then we still believed in friendship?”

Deputy editor-in-chief of Welt/N24 media group noted the effect of the targeting plan:

​”And West Berlin would burn down as collateral damage.”

​”And if you think that today, this would be planned differently, you are quite naive,” user Wenwundertskind tweeted.

Strange TargetsThe release also showed some faulty information gathering by the US military. One of the targets for “systematic destruction” is the village of Kuchino, 14 miles east of Moscow. The US military targeted Kuchino for its population and a “radio and television” site.

In 1956, Kuchino, was a village of less than 17 thousand with a ceramics and brick factory, a chicken farm and two research institutes, one for the study of grapes and another for research in dam construction. However, Kuchino had no broadcasting facilities. It is unknown if Kuchino, now part of a larger commuter suburb, is still a target for systematic nuclear annihilation.

To be fair, other targets were more exact. The town of Schelkovo in 1956 did have a factory which made precursor chemicals for chemical weapons. The village of Tomilino is home to a spacecraft factory, NPP Zvezda (listed instead as “Military Storage Areas”), while the village of Mishutkino, targeted for “railroad yards and shops” was likely confused for a nearby village, which has a railroad yard servicing some military proving grounds.

It could also mean, however, that when you target a densely populated area, you’re bound to hit something, even if it’s just a few chicken coops and grape researchers.