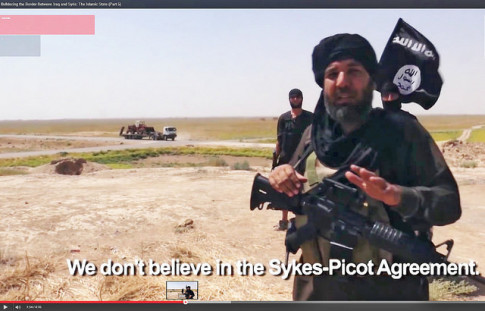 Baghdad, Iraq (TFC) – An Islamic State commander was killed in Salahuddin province and his body was searched. A cell phone retrieved from the corpse revealed messages from Turkish intelligence services proving the NATO country was providing security for ISIS militants when they traveled between Turkey and Iraq. This is the second NATO country implicated in assisting the Islamic State’s troops. The first was Canada.

The IS commander was killed by Hashd al-Shaabi, a loyalist volunteer force. Jabbar al-Ma’mouri, a leader within the force made the announcement. He said, “The mobile phone also contains other important information which cannot be disclosed now, and it has been delivered to the specialized security groups for further scrutiny.”

Turkey and the Islamic State share two enemies: President Assad of Syria and the Kurdish people. This incident comes on the heels of the Turkish Air Force shooting down a Russian plane engaged in operations against the Islamic State. Ten days ago, Turkey invaded Iraq briefly. It sent its troops to within a few hundred miles of where the phone was recovered. Turkish artillery has also rained shells down on the Kurdish community of Kobane.

While the western media seems to be overlooking and downplaying NATO support for the Islamic State, some senior US officials are speaking out. Former US Department of State senior adviser David Phillips said, “Turkey’s role has not been ambiguous — it has overtly supported the ISIL. It has provided logistical support, money, weapons, transport and healthcare to wounded warriors.”

Across the border in Syria, President Assad blasted western adventurism in Syria and cast the NATO powers as an obstacle to peace. He said, “There are only a few countries ready for this. No one dares to establish contact with Syria to resolve the situation as long as it does not appear on the agenda of the United States.”