– EU Places The Interests of Jews Ahead of Europeans:

A common theme of both my podcast program and my writings is the truly disgraceful manner in which White “leaders” and institutions, such as the United States federal government and the European Union, for example, place the interests of Jews (and other non-Whites) ahead of the interests of their own traditional ethnic demographic (read: White people).

This ugly reality is literally on display on a daily basis.

In an astoundingly revealing article published by The Times of Israel, it was recently reported that the European Union is acceding to Israel’s demands that it redefine and clarify the specific meaning of “anti-Semitism,” i.e., making basic, factual observations about Jews, the Jewish state of Israel, Jewish criminality and treachery, the Jewish agenda to undermine, pervert, and destroy traditional Western civilization, Jewish supremacy and control over critical aspects of (formerly) White nations, etc., “in a bid to better fight the phenomenon,” according to the article. 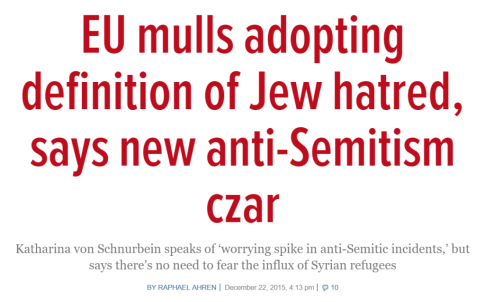 […] “The definition of anti-Semitism is very disputed, even among Jews themselves. The main dissent revolves around the question of manifestations against the State of Israel. We’re currently looking into this issue,” Katharina von Schnurbein told The Times of Israel in a telephone interview last week from Brussels. “One thing is clear: Anti-Semitism can sometimes hide behind anti-Zionism. That is certainly our understanding here.”

A German national, Schnurbein was named the European Commission’s coordinator on combating anti-Semitism earlier this month. Last week, she participated in the ninth EU-Israel Seminar on Combating Racism, Xenophobia and Anti-Semitism in Brussels, together with some 30 representatives from Israel’s Foreign Ministry, the European Commission, the EU’s External Action Service, Fundamental Rights Agency, technology experts and NGOs.

During the meet, Israel asked the EU to adopt a formal definition of anti-Semitism, said Akiva Tor, who heads the Foreign Ministry’s bureau for world Jewish affairs and world religions. “This would enable better monitoring and better law enforcement,” he told The Times of Israel on Monday.

“We also expressed our view that any formal definition of anti-Semitism must include the issue of delegitimization of Israel and the denial of Israel’s right to exist as forms of anti-Semitism,” he said. “We found the EU quite attentive and we look forward to working with them further on it.” […]

It still astonishes me to fully come to grips with the reality that White “leaders” literally place the interests of hostile, alien, non-White ethnic groups – Jews, Muslims, Blacks, illegal immigrants, etc. – ahead of the interests of their own people.

The West is controlled and dominated by a hostile elite that is actively and consciously working against the interests of White people, period. That should be crystal clear to all objective observers of international politics and current affairs.

Have you ever seen a European Union meeting or conference centered around the reality of White genocide and the future prospects of the White race? Are there any official conferences or committees dealing with anti-White hate speech, anti-White biases and false historical perspectives, or non-White on White violent crime and intimidation?

During the EU-Israel seminar, experts mostly discussed ways to use legislation to tackle anti-Semitic hate crimes and online hate speech inciting violence, said Schnurbein, who has visited Israel on several occasions and is currently learning Hebrew.

“In recent years we have seen a worrying spike in anti-Semitic incidents, especially after the fatal terror attacks in Toulouse, Brussels, Paris and Copenhagen. And we see there’s an increased fear among European Jews, for example in the UK.”

Local agencies monitoring anti-Semitic incidents have registered a dramatic increase in recent months, Schnurbein said. In France, for instance, there has been an 84 percent increase in verbal and physical attacks against Jews during the first six months of 2015, compared to the same period in the previous year, she said, citing new figures collected by the Service de Protection de la Communauté Juive.

“That is worrying. The Commission fully understands the concern of the Jewish community and we take them seriously,” she said. “Anti-Semitism, no matter how marginal, is never acceptable. There’s no tolerance for any form of racism and anti-Semitism in our European values.”

At the same time, Schnurbein rejected concerns that the current wave of immigration to Europe from Syria and other Arab countries would lead to an increase in anti-Semitism. Germany, which accepted the largest contingents of refugees this year, has actually seen a drop in the number of anti-Semitic incidents in the first half of 2015, she said.

“It is very clear that the values we have in EU include no tolerance for anti-Semitism, and it’s clear that this will become part of the value system for all those who want to stay in Europe,” she said. “Our aim is to build an inclusive society where everybody can feel at home, and that’s what we’re working toward — with education, for example. In schools, but also in terms of civic values, ‘no tolerance toward anti-Semitism’ will be part of that civic education.”

Could it be any more obvious how entirely traitorous Western “leaders” are today?

They are openly admitting and demonstrating just how subservient to international Jewry they truly are. They are not in the slightest bit concerned with their own nations; they are clearly and actively working for the international Jew and his agenda to subvert, pervert, and ultimately destroy Western civilization and everything it stands for.