With the Slow down of the Atlantic conveyer belt the world must brace for a mini ice age. Described in above article.

The sun is predicted to hibernate. The formula for an ice age.
A team of European researchers have unveiled a scientific model showing that the Earth is likely to experience a “mini ice age” from 2030 to 2040 as a result of decreased solar activity.

From 1645 to 1715 global temperatures dropped due to low solar activity so much that the planet experienced a 70-year ice age known as Maunder Minimum which saw the River Thames in London completely frozen.

The researchers have now developed a “double dynamo “model that can better predict when the next freeze will be.

Based on current cycles, they predict solar activity dwindling for ten years from 2030.

Professor Zharkova said two magnetic waves will cancel each other out in about 2030, leading to a drop in sun spots and solar flares of about 60 per cent. 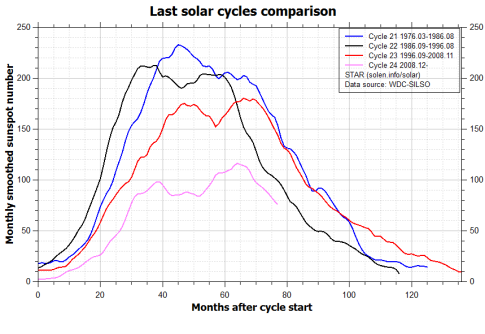 According to that chart the world already ended three times but somehow were still here.

Someday in the future a real climate changer like a super volcano / caldera event will occur and we’ll realise this whole argument about 0.1 degree temperature changes was utter B.S. and scaremongering by thieving politicians.