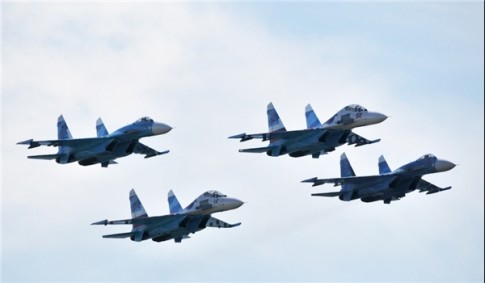 TEHRAN (FNA)- Syrian President Bashar al-Assad’s plane will be escorted by four Russian fighter jets during his upcoming visit to Iran, reports said, adding that the US coalition has been alerted to stand down as the Russian jets will have the permission to fire at will at any incoming aircraft.

“Four strategic Russian fighter jets will accompany the plane carrying the Syrian president during the visit to and from Iran,” the Lebanese al-Diyar daily reported on Sunday.

The newspaper also added that the Syrian president is due to travel to Tehran via the Iraqi airspace.

“The US-led international coalition’s air command has been warned not to approach Bashar Assad’s plane to avoid engagement,” it said.

Informed sources said on Friday that President Assad is slated to visit Iran in late December or early January.

“Assad’s visit to Tehran will be his second trip abroad in the past four years after his last month’s visit to Moscow,” an informed source said.

The source noted that President Assad’s visit will take place in late December and early January, and said that the details of his visit will be announced later.

President Assad’s visits to allied nations takes place after the recent victories of the Syrian army against the Takfiri terrorist groups.

On October 20, Assad arrived in Moscow for an official visit to the country.

The Syrian and Russian presidents conducted lengthy negotiations, which then continued in the presence of Russia’s top policymakers.

Iran has always supported the Syrian government and nation in their ongoing fight against the terrorist groups.