Earlier this year, quite a few members of the American electorate were distressed to learn that the Clinton Foundation had apparently suffered what we called a “Geithner Moment.”

For those who might have missed the story, when a Reuters investigation revealed discrepancies, the charity decided to refile five years worth of tax returns and review filings dating back as far as fifteen years. At issue were disclosures around contributions from US and foreign governments which Reuters claimed totaled “tens of millions” of dollars in a typical year but which mysteriously disappeared altogether from the organization’s 990s starting in 2010. As we noted at the time, the Foundation was quick to point out that when it comes to charities, it is exemplary in terms of being forthright, but the missing disclosures will likely serve to fan the flames for Republicans who claim Clinton’s ties to the charities could make her susceptible to the influence of outside interests.

A few days later, the charity’s acting CEO penned a lengthy blog post explaining the “mistakes” and assuring voters that the organization goes to great lengths to avoid conflicts of interest. Finally, a few days after that, IB Times questioned whether a $200,000 payment made to Bill Clinton by Goldman Sachs (ostensibly as compensation for a speaking appearance) was an effort to influence the State Dept’s decision making process surrounding a loan from the Export-Import Bank to a company that was set to purchase planes from a Goldman-backed supplier. Revelations that Hillary Clinton’s State Department approved $165 billion in arms deals to nations who had previously given money to the Clinton Foundation didn’t help to reassure anyone.

Put simply: if voters don’t know where the money is coming from (even if the contributions are “charitable”) they are operating with incomplete information with regard to who may be influencing the candidates.

Now, it turns out Tennessee Senator Bob Corker – who you might recall had a run in or two with Ben Bernanke and once penned a scathing FT Op-Ed about the market’s unhealthy fixation with the Fed – failed to disclose millions in income from hedge funds and real estate investments.

Ok, so what’s the nature of these “mistakes?”

The new forms show that Mr. Corker had failed to properly disclose at least $2 million in income from investments in three small hedge funds based in his home state.

Wow. Ok, was there anything else?

He also didn’t properly report millions of dollars in income from commercial real-estate investments due to an accounting error.

This is starting to seem like a rather glaring omission – surely a member of the Senate Banking Committee wouldn’t have “forgotten” to disclose anything else, right?

And he didn’t disclose millions of dollars in other assets and income from other financial transactions.

Goodness. So what’s the grand total?

The senator also underreported rental income from his commercial real-estate investments in Corker Properties, a company he founded years before being elected to the Senate.

As a result of the accounting error, Mr. Corker’s new forms show additional income of at least $3.8 million between 2007 and 2014 from his commercial real-estate holdings.

“This is not a situation calling for punishment or admonition by the Ethics Committee,” Robert Walker, a former chief counsel for the Senate ethics panel told The Journal. “You can’t just disclose once you get caught,” Anne Weismann, president of the Campaign for Accountability, counters.

For those unfamiliar, this isn’t the first time Corker has come under scrutiny for his investments. Just last month, the Campaign for Accountability (CFA), a D.C. watchdog, called for an SEC and ethics investigation of Corker in connection with his family’s trading in shares of CBL & Associates (a REIT based in Tennessee). Here are some excerpts from the CBA’s press release:

Between 2008 and 2015, Sen. Corker, his wife and daughters made an astonishing 70 trades of stock in the real estate investment giant CBL & Associates Properties – more than triple the number of transactions he made of any other stock. Some of the trades closely preceded company announcements that led to changes in the stock’s price and seemingly resulted in the senator making millions of dollars.

As the Wall Street Journal has reported, Sen. Corker failed to report numerous trades of CBL stock. Federal law requires members of Congress to report stock trades and file reports disclosing their assets. Many of Sen. Corker’s profitable trades were made in advance of his broker, UBS, issuing reports impacting CBL’s trading price.

Sen. Corker recently amended his filings to reveal a 2009 purchase of between $1 and $5 million of CBL stock, sold just five months later in 2010 at a 42% profit. Similarly, Sen. Corker made purchases worth between $3 and $15 million in 2010 and, just after his last trade, UBS said it was upgrading its outlook. The stock went up 18%. Shortly thereafter, Sen. Corker began selling; a week later, UBS downgraded the stock and the share price soon declined about 10%.

Nope, nothing suspicious about that. But it gets better.

As CBA also notes, “as a member of the Senate Banking Committee, Sen. Corker has advanced legislation that would financially benefit UBS and CBL.” Here are some excerpts from a piece by Vanity Fair contributing editor Bethany McClean who parsed the CBA’s entire complaint (enbedded below):

As the complaint—filed with the SEC and the Senate Select Committee on Ethics—details, Corker and CBL go way back. Corker began his career at a company whose primary business was subcontracting for CBL and which is now substantially owned by CBL. CBL executives were Corker’s “first and most generous donors,” as the complaint put it, when Corker filed to run for Congress in 2006.

Both directly and indirectly, CBL have given generously to Corker. According to the complaint, CBL’s executives, directors and their spouses rank among the senator’s top campaign donors, contributing $88,706 to his campaign committee and PAC since his 2006 run. Since Corker’s arrival in the Senate, CBL executives have contributed more than $50,000 each to NAREIT and ICSC—which, in turn, were part of a nine-PAC consortium that held a fundraiser for Corker in Washington in 2011. NAREIT and ICSC also donated $15,000 directly to his campaign committee since his arrival in the Senate.

A few years ago, the Environmental Protection Agency and the Army Corps of Engineers issued a rule called “Waters of the United States,” which would have expanded the EPA’s jurisdiction.

Both the ICSC and NAREIT were among the many who fought against it.

Using a rarely used tool called a Congressional Review Act, the Senate passed a resolution last month by a vote of 53 to 44 to rescind the rule. Corker’s vote in favor of rescinding the rule was celebrated on Twitter.

Then there’s the long, vicious fight over online retailers not charging sales tax, because states are barred from collecting sales tax from out-of-state companies. This has been an area of particular concern to companies like CBL, which own shopping malls, and which stand to lose out if consumers choose to buy online.

Back in 2013, a measure called the Marketplace Fairness Act, which would have required online retailers to collect sales taxes, failed in part because some top Republicans opposed it. Corker supported it. Just this spring though, a bipartisan group of senators including Corker reintroduced the measure.

You’ll also note that Corker comes in at number 23 on the richest members of Congress list. Here’s the entry from Roll Call: 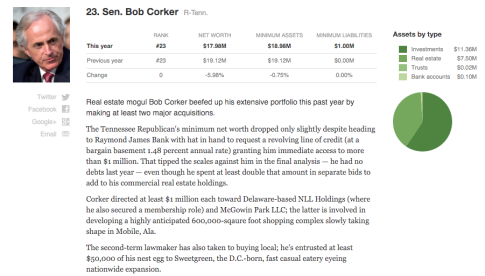 So if you needed another reason (or three, or four) to distrust politicians and to despise business as usual inside the Beltway, you can find plenty of things to be disgusted with here. Indeed, the latest revelations about Corker’s “ommissions” look like par for the course for the Senator.

While none of the above will likely come as any surprise to readers, what we would note is that it’s precisely this kind of thing that’s driven voters to support a certain Presidential candidate who, like Corker, knows a thing or two about real estate…