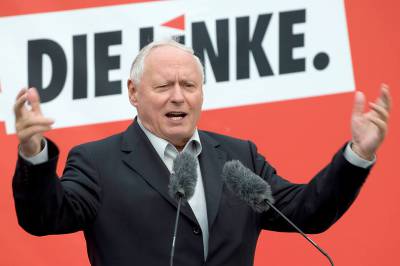 So it caught people’s attention when he excoriated Ash Carter and Victoria Nuland on his Facebook page yesterday.

Lafontaine’s outburst came a day after his wife, Sarah Wagenknecht, blasted Merkel’s Russia policy in an interview on RT.

“The US ‘Defense’ secretary, i.e., war minister is in Berlin.  He called on Europe to counter Russian ‘aggression’.  But in fact, it is US aggression which Europeans should be opposing.

“The Grandmaster of US diplomacy, George Kennan described the eastward expansion of NATO as the biggest US foreign policy mistake since WW2, because it will lead to a new cold war.
“The US diplomat Victoria Nuland said we have spent $5 billion to destabilize the Ukraine. They stoke the flames ever higher, and Europe pays for it with lower trade and lost jobs.
“Nuland says ‘F*ck the EU’. We need need an EU foreign policy that stops warmongering US imperialism.
“F*ck US imperialism!”