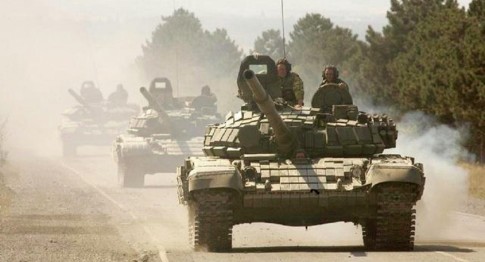 – The Best is Yet to Come: Russian Tanks to Become ‘Invisible’, Grenade-Proof:

The Mantle, developed by the Institute of Steel, which is part of the Tractor Factories Concern, consists of a screen with dynamic protection elements, which is placed 50 millimeters to 1,500 millimeters ahead of the protected object, Novosti VPK defense website reported.When hit by an antitank grenade the screen’s low-density surface prevents it from blowing up with its discreet protective elements destroying the grenade fuse’s electrical circuit.

Simultaneously, the Mantle partially destroys the grenade’s cumulative element. As a result, when hitting the tank’s main armor, the grenade either fails to explode or its armor-piercing ability is significantly undermined.

As to the Mantle’s stealth capability, it makes tanks and infantry fighting vehicles six times less visible to enemy radar and three times less detectible in the infrared spectrum.

The Mantle is installed and uninstalled in a matter of just a few minutes and requires no additional training.

I’ve mentioned many times that the elitists, who control all sides just like in WW2, have WW3 planned for us.

This stealth capability will be important during the beginning of WW3.