– Malaysia Is Hunting For Mystery Owner Who Abandoned Three Boeing 747 On Its Airport:

One year ago, someone quietly parked their three Boeing 747-200F (which as shown on the image below have no identifiable insignia) at the Kuala Lumpur International Airport in Malaysia and since then has decided – for reasons unknown – to forget all about them. 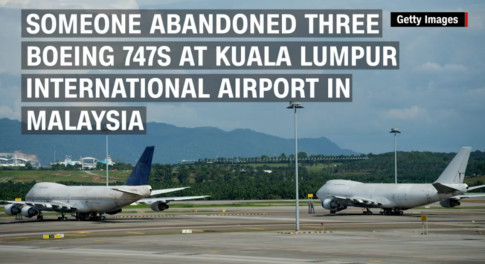 However, in the meantime, the airplanes have been raking up landing, parking and other charges and now the airport wants to not only find the owner, but to get paid. 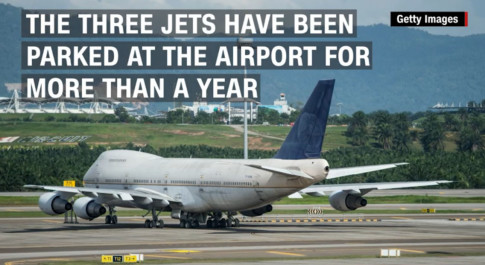 Boeing no longer makes the 747-200, but the more modern 747-8 Freighter version is the company’s second-most expensive plane, with a list price of $379.1 million.

As CNN reports, officials from Malaysia Airports Holdings eager to clear the massive clutter and collect their unpaid invoices, took out ads in Malaysia’s The Star and Sin Chew Daily newspapers asking for the owner to please come get their planes. It has given the “mysterious” owner a 14-day ultimatum in which to collect his multi-ton “lost and found” or else the planes would be impounded, sold or “disposed of”:

“If you fail to collect the aircraft within 14 days of the date of this notice, we reserve the right to sell or otherwise dispose of the aircraft pursuant to the Civil Aviation Regulations 1996 and use the money raised to set off any expenses and debt due to us under the said regulations.” 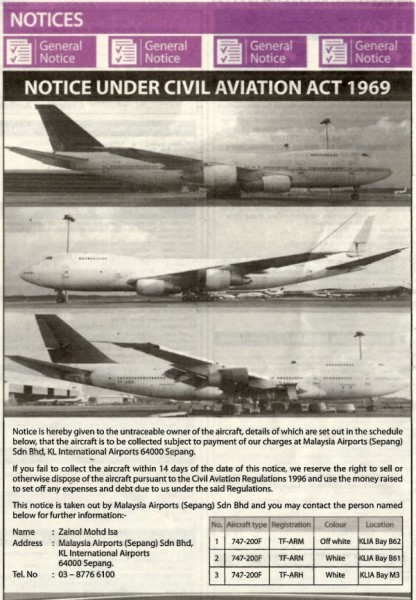 “The giving of such notice by way of advertisement is a common and reasonable step in the process of debt recovery especially in cases where the company concerned has ceased operations and is a foreign entity whereby exhaustive steps undertaken to find a contact person have not been successful,” Malaysia Airports said in a statement.

Malaysia Airports general manager Zainol Mohd Isa told CNN the aircraft have been parked at KLIA for more than a year, having been abandoned at different times. It’s not clear who now bears responsibility for the aircraft and any related charges.

“They’ve yet to pay the parking fee — where do we send the bill?” Isa said.

But if one has the registration number of the planes, how can one not track down the owner? That is a question we asked, especially since the registration numbers are readily available, TF-ARN, TF-ARH, TF-ARM, yet what emerges is that despite several aviation databases listing the Boeings as belonging to leasing firm Air Atlanta Icelandic, that company says it sold them in 2008.  Since then the aircraft appear to have changed hands several times, and the current owner is unknown..

Isa said that storage space wasn’t a problem at the airport, adding that the three Boeings are the only aircraft currently abandoned there.

Even more surprising is an update from Bloomberg according to which, the general manager has been in communication with the so-called owner, “but they have not been responding to take away the aircraft. That’s why we go through this process to legalize whatever actions we want to take,” Zainol said by phone Tuesday. “We want to clear the area, we want to utilize our parking bay.”

And while one wonders just who would simply park their airplane and forget it for over a year (or rather just how insolvent this party must be), more questions emerge: how is it possible that there is no clear ownership title for something as massive and, well, heavy as an airplane? Was Linda Green also robosigning aircraft leases? And more importantly, just why would someone be willing to risk confiscation of their airplane, unless of course, the debt on the machine is far greater than the equity value which makes them worthless to the current “owner.”

Finally, one can’t ignore the irony that Malaysia, which itself “misplaced” one of its own aircraft under far more tragic circumstances and has still be unable to find the disappeared MH370, is the country now engaged in this reverse inquiry. And perhaps just as curious is that it is Malaysia Airlines itself which is now eager to make its own fleet of A380, acquired under far more pleasant times, disappear by either selling or leasing them to some other greater fool.