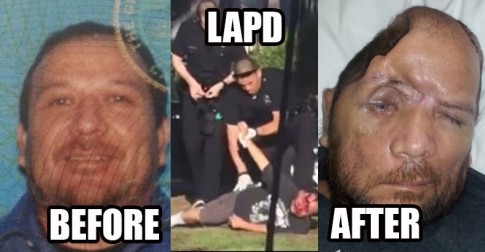 – Innocent Unarmed Man Shot in the Head While Asking Cops for Help has to Sue to Get Justice:

Los Angeles, CA — Thanks to Los Angeles’ finest, Walter DeLeon has lost a quarter of his skull, almost all his eyesight, the ability to walk, and his life is in shambles.

In June of this year, DeLeon, 49, was on his regular evening walk to a nearby park when LAPD Officer Cairo Palacios “feared for his life” and shot him in the head.

DeLeon was not armed, he did not attack the officer, nor did he say or do anything that would have been construed by a normal person to be aggressive behavior. However, the dastardly Palacios and his partner perceived ‘imminent danger’ because DeLeon had a towel wrapped around his hand to wipe the sweat from his face on his walk.

An attorney for Palacios, Gary Fullerton explained how running up to an unarmed man and shooting him in the face was ‘within departmental policy’ because Palacios was convinced his life was in danger due to the towel.

“He basically forced their hand to deal with him,” Fullerton said. “In the matter of a couple seconds they have to make a choice, and the choice is, ‘Do I let him shoot me first and then fire?’ or ‘Do I shoot first and defend myself?’”

So, the courageous and heroic public servant made the split decision to shoot first and ‘defend’ himself against an innocent man with a towel. The results were catastrophic for DeLeon whose life has been ruined by this cop’s cowardice.

“The next thing he was shot, and the next thing he remembers is he was in the hospital,” DeLeon’s attorney, Ben Meiselas, said . “This is the most catastrophic of catastrophic injuries and it affects every aspect of life — physical, economic, family. It’s a total destruction of self and self-worth, and the only way to rebuild is through this process we’re initiating.”

A short video of the aftermath of the shooting shows the brave officers rolling DeLeon’s lifeless body over and placing cuffs on the innocent man. They made no attempt to even stop the bleeding.

Somehow, DeLeon did not die. He spent the next five months in the hospital, undergoing ten surgeries and is unable to function without constant care from his family.

“My whole life was turned upside-down,” DeLeon told The Associated Press through tears.

Yovanna DeLeon, Walter’s sister, told the AP that she’s upset that this officer has yet to face consequences.

“We get up, we get ourselves dressed and ready to eat, we go about our day … My brother will never be able to do that again,” she said. “If this had been a normal citizen that had done this to Walter, that person would have never seen the light of day.”

Since the assailants involved in the armed assault on DeLeon were agents of the state, however, they not only get to the see the light of day, they got a paid vacation. Immediately after the shooting both officers were placed on paid leave. When the leave ended, they returned to work on administrative duty.

They admittedly killed an innocent and unarmed man. Not only are they not in jail, but they are still collecting a paycheck and still working as cops.

According to the AP, the DeLeons are seeking unspecified damages. They also want Palacios to face criminal charges and for the department to make changes to ensure no similar shootings ever happen again.