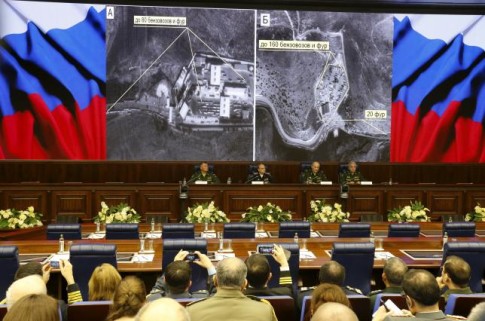 Defence ministry officials sit under screens with satellite images on display during a briefing in Moscow, Russia

Russia has asked the United Nations Security Council to hold closed-door discussions on Turkish military action in Syria and Iraq, diplomats said on Monday, in the latest sign of increasing tensions between Moscow and Ankara.

Russia’s U.N. mission had no immediate comment. But council diplomats said they expected a Nov. 24 incident in which Turkey shot down a Russian plane near the Syrian-Turkish border would come up. Relations between Russia and Turkey have nosedived since that incident.

“We don’t have details but Russia has asked to discuss the issue of Turkish action in Iraq and Syria,” a diplomat told Reuters. Other council diplomats echoed his remarks.

The discussion was expected to follow a closed-door meeting of the 15-nation council on unrelated issues beginning at 3 p.m. ET (1900 GMT) on Tuesday, the diplomats said.

The United States, president of the Security Council this month, will chair the discussions.

Turkish officials have said the Russian plane it shot down violated Turkish airspace and had been warned repeatedly. Moscow says the aircraft was over Syria, where Russia is carrying out an air campaign to support the forces of President Bashar al-Assad in a nearly five-year-old civil war.

Russia says it is targeting Islamic State militants, who have taken over large swaths of Syria and Iraq and made inroads in Libya and Yemen. Western officials say very few of Russia’s airstrikes were aimed at Islamic State, with most of them hitting Western-backed Syrian rebel groups.

Separately, Iraq has accused Turkey of violating its sovereignty by deploying a heavily armed contingent of forces to a camp near the front line in northern Iraq last week. It threatened to refer the case to the Security Council unless Turkey withdraws its forces.

It was not clear if Russia intended to raise the specific Iraqi complaints, nor was it clear if the Russian delegation wanted the council to take action.

Turkey said on Monday it would not withdraw hundreds of soldiers who arrived last week at a base in northern Iraq, despite being ordered by Baghdad to pull them out within 48 hours.

Ankara says the troops are there as part of an international mission to train and equip Iraqi forces to fight against Islamic State. The Iraqi government says it never invited such a force.