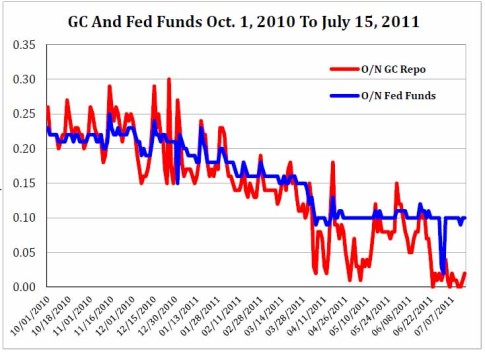 After today’s market plunge, the result of what even Goldman admitted may have been a major policy error by the ECB, suddenly the Fed’s determination to hike rates in two weeks lies reeling on the ropes. After all, what the ECB did was an implicit tightening of reverse QE1 proportions  (it is no accident that the EURUSD is soaring as much as it did in March 2009 when the Fed unleashed QE).

But assuming the Fed is still intent on hiking at all costs, and does just that in two weeks time, a question many are asking is where will General Collateral repo trade in case the Fed does decided to push rates higher by 0.25%: after all the Reverse Repo-IOER corridor is the most important component of the Fed’s rate hike strategy, one which better work or otherwise the Fed will be helpless to raise rates with some $3 trillion in excess liquidity sloshing around, and what little credibility it has will be gone for good.

And much more importantly, what are the liquidity implications from such a move.

For the answer we go to the repo market expert, Wedbush’s E.D. Skyrm. Here are his thoughts:

Where will General Collateral trade when the fed funds target range is moved 25 basis points higher to .25% to .50%? In the most simple method, GC has averaged about .15% for the past month, which implies a GC rate around .40% after the Fed move.

However, given the unprecedented amount of liquidity in the financial system, there’s a belief the Fed will have problems moving overnight rates higher.

We have two quantifiable events over the past few years where the Fed moved Repo rates higher or lower: quarter-end and the QE programs. Given there are so many moving parts, consider these to be very rough estimates: Beginning in 2015, when funding pressure began each quarter-end, the market, on average, took approximately $255B additional collateral from the Fed and, on average, GC rates averaged 20.5 basis points higher.

If readers didn’t just have an “oops” moment, please reread the last bolded sentence until they do, because it explains precisely what the market is missing about the Fed’s rate hike cycle: according to Skyrm’s calculations, to push rates by a paltry 25 bps, the smallest possible increment, what the Fed will have to do is drain up to a whopping $800 billion in liquidity!

In other words, to “prove” to itself that it is in control and the economy is viable, the Fed will effectively conduct, via reverse repo, an overnight QE2…. only in reverse.

For those who think this will have a positive, or even neutral, impact on risk assets, we have several bridges located in Brooklyn that we are looking to offload at 150% of par. Please send your BWICs to the usual address.