– Greeks Told To Declare Cash “Under The Mattress”, Jewelry And Precious Stones:

When earlier today we read a report in the Greek Enikonomia, according to which Greek taxpayers would be forced to declare all cash “under the mattress” (including inside) or boxes that contain more than 15,000 euros as well as jewelry and precious stones (including gold) worth over 30,000 euros, starting in 2016, we assumed this has to be some early April fools joke or a mistake.

After all, this would be merely the first step toward full-blown asset confiscation, conducted so many times by insolvent governments throughout history, once the government cracks down on those who made a “mistake” in their asset declaration form or simply refuse to fill such a declaration, thereby making all their assets eligible for government confiscation.

It was not a joke.

Here is the take of Keep Talking Greece, whose stunned response mirrors ours.

Cash “under the mattress” totaling more than 15,000 euro, jewelry and other valuable items such as diamonds and gemstones, should be declared to electronic system of tax authorities, Taxisnet, as of 1 January 2016. Next to properties and vehicles and shares, now the taxpayers will also have to declare their deposits. And not only that. They will have to fill if they rent bank lockers and if yes, also the name of the bank and the branch, even if abroad. 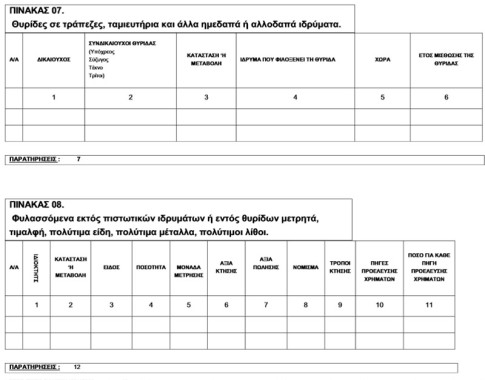 A joint ministerial decision issued by the Ministries of Justice and Finance indicates that taxpayers in Greece should add all their valuables into a new category of the tax declaration, the “Assets declaration.”

Specifically, the decision provides that:

“Assets declarations” are submitted electronically and mandatory via Taxisnet.
Starting date for the submission is 1.1.2016

Declared must be cash money if more than 15,000 euro and precious items if their total value exceeds 30,000 euro. These amounts apply cumulatively per household (husband, wife, underage children).

To facilitate the completion of the declaration, data from the income statements (E1 and E9) will be drawn automatically.

Note that this Assets declaration process will initially apply to lawmakers, journalists, public servants etc and is the rehearsal for the creation of the electronic property & assets register that will be extended to all taxpayers. 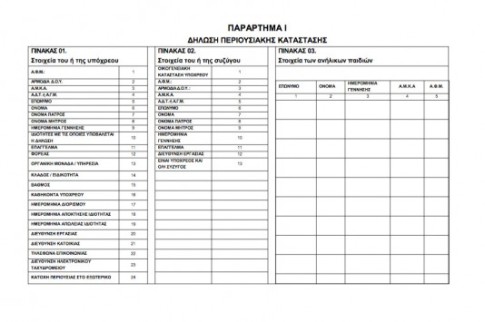 The new assets declaration form has a total of 56 pages.

The decision has been taken “in the context of support and development of the economy,” the ministers state.

First of all, the ministerial decision will certainly support and help to growth the noble profession of accountants.

How can a bride know the value of the jewelry her parents-in-law gave as a wedding gift?

And what will happen if one will not declare his assets? The tax authorities will raid the home and search under the mattress to find grandma’s ring?

Are you kidding me, Greek Syriza state?

PS we should note that this assets declaration was in plan before SYRIZA came into power. Not sure about what minister promoted this, I vaguely reckon it was form New Democracy. Or most likely it was a Troika’s idea in order to grab the so-called ‘black money’ that starts with 15,001 euro in cash and diamonds worth 30,001 euro.