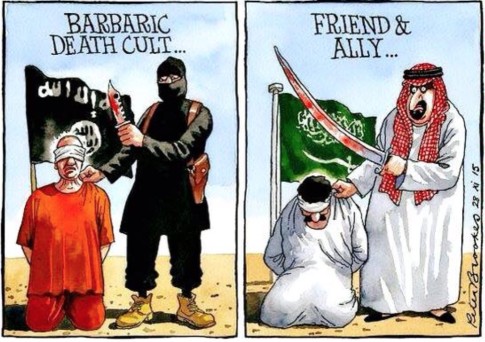 – Saudi Arabia and ISIS – A Side by Side Comparison:

Today, I present to you a power graphic courtesy of Middle East Eye, which demonstrates precisely why the Saudis are so sensitive about the topic. Namely, because the accusations are true.

The Islamic State (IS) and Saudi Arabia prescribe near-identical punishments for a host of crimes, according to documents circulated by the militant group.

IS published a list of crimes and their punishments on 16 December 2014 to serve “as an explanation and as a warning” to those living in territory under their control in large parts of Iraq and Syria.

The document lists hadd crimes, which are considered to be “against the rights of God,” and includes fixed punishments for theft, adultery, slander and banditry.

Crimes deemed hadd and their punishments are derived from the Quran and the hadith, the collected teachings and sayings of the Prophet Muhammad. However, with the exception of Saudi Arabia, and IS-controlled areas, they are rarely applied.