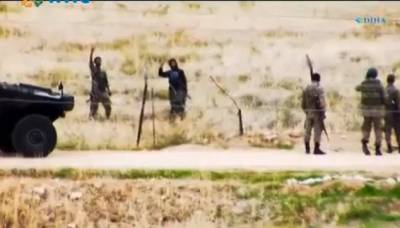 An ISIS-Turkish shindig. Nothing out of the ordinary

Turkey: shooting down Russian planes while gossiping with takfiri terrorists

Don’t file this one under “surprising”, but a video has emerged of ISIS jihadists having a lovely chit-chat with Turkish border guards. The video is allegedly from October, so this is not a new Turkish tourism campaign launched in the wake of losing hundreds of thousands of Russian tourists. No, Turkey just sort of “likes” ISIS. They go together like peas and carrots. This is precious:

The clip begins with the two apparent jihadists lighting fires near a group of cars, which are believed to have been abandoned by desperate Kurdish families who fled Kobane in recent weeks when ISIS militants stepped up their attacks on the city.

After appearing to realise they are being filmed from inside Turkey, the pair start walking towards the border fence, stopping only to mockingly wave at the amateur filmmaker.

As they reach the border fence, an armoured military vehicle belonging to Turkish border guards speeds up to meet them. Heavily armed officials jump out the back of the car and – after briefly talking on their radios, simply engage the men in conversation.

At one point the situation appears tense and a border guard scampers towards the militants with his gun briefly raised, but he stops seconds later and also begins talking to the men.

After several minutes chatting, the militants wander off, defiantly raising their index finger to the sky to represent jihadism while chanting ‘Allahu Akbar’ – a phrase that translates as ‘God is the greatest’.

Turkey, in a terrorist nutshell.