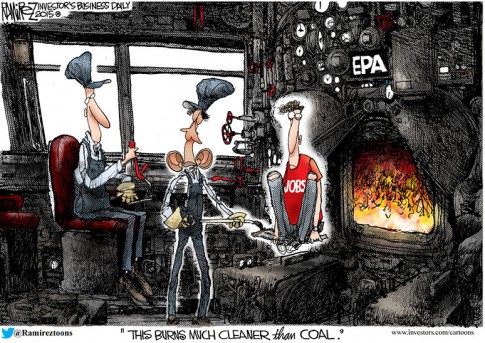 Let’s not forget the other travesty going on in Paris at the moment – the one Obama thinks will really show ISIS that we mean business. That’s the one in which elected officials from nations across the globe conspire to raise taxes and put crushing new controls on industry using the pretext of global warming – oh, sorry, “climate change – because the public won’t support these policies they’ve wanted to impose all along if not for some scare scenario about a looming global ecological disaster.

Actually the public doesn’t support it even with that pretext because they can detect Bolshevik more easily than politicians think, but Obama and his counterparts going ahead with the charade anyway. And as they do, here’s an interesting detail to chew on: According to the agreement Obama wants to put in place, the U.S. would have to reduce its carbon emissions immediately, while China can continue to increase its carbon emissions until reaching “peak” in 2030. India’s emissions will be allowed to triple between now and 2030.

Keep in mind, this is not a negotiating position of the Chinese and the Indians for which Obama must come up with a counterproposal. This is Obama’s own proposal:

Todd Stern, the chief American negotiator heading to Paris, has tried to justify the disconnect. Mr. Stern recently told the Senate that developing countries need to be allowed to keep emitting so that their economies can continue to grow by 8%-9% a year. “If you’re an economy which is growing at eight or nine percent a year because that’s the stage of development you’re in,” he testified, “it’s pretty hard to say you’re supposed to slam on the brakes and go negative overnight.”

There’s an astounding admission embedded in that rationalization if you just pay attention. If China’s and India’s emission have to keep increasing so as not to stall their economic growth, then Stern is admitting that state-mandated cutbacks in carbon emissions are a detriment to economic growth – not that many of us didn’t already know that, of course. And Stern’s boss is volunteering to sacrifice U.S. economic growth to facilitate faster growth in China and India.

That’s a pretty big problem considering that average U.S. quarterly GDP growth since 2011 has been a paltry 1.99 percent. If we know that forced carbon reductions impeded GDP growth – and Stern admits that we do in the statement quoted above – then what exactly is the thinking behind further bogging down our own growth?

If your first instinct is to think that Obama is just a really bad negotiator, understand that global warming has always been a mere excuse to do what liberals want to do anyway. The policy changes this deal would require the United States to implement are harmful to U.S. economic growth, but in no way are they anathema to Obama’s own agenda. Quite the contrary. Raising taxes on industry and imposing new environmental regulations are his dream. The climate deal is just a way to get there.

Presumably the Republican Senate would never ratify this treaty, although I’d be careful about investing too much confidence in Mitch McConnell. But even if the Senate does refuse to ratify, that doesn’t mean it’s the end of the story – not with this president. He could always decide to treat the deal as an agreement between executives, as he did with the Iran deal since he knew he couldn’t get ratification if he treated it as a treaty.

The harder part, I suppose, would be the enabling legislation that would put in place the taxes and regulations necessary to fulfill America’s obligations under the deal. But even there, President Executive Order will surely look for creative ways around Congress so as not to disappoint his foreign counterparts, because Obama would never welch on a deal unless it’s a defense pact with Poland and the Czech Republic, since that would have upset Vladimir Putin.

Just about every action this guy takes is counter to the interests of the United States, just as they are consistently in line with his left-wing ideology. You get to the point where you can’t explain one horrible deal after another by saying he’s just really bad at this – and you have to consider the possibility that he knows exactly what he’s doing.