All those migrants are just brought into all those countries before hyperinflation and the financial/economic collapse will set in.

They love it when the blood is running in the streets. 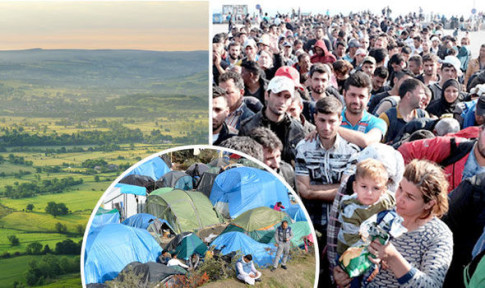 – 636,000 migrants arrive in UK in ONE year, say goodbye to the Britain you know say experts:

A STAGGERING 636,000 immigrants have arrived in the UK in the last 12 months as experts predict the new bigger Britain will include 20 MILLION more cars and entire NEW TOWNS built to house the boom.

The UK’s beloved countryside is facing devastation with almost unimaginable amounts of infrastructure needed to cope with a dramatic rise in the number of people calling Britain their home, researchers warn.

The Office of National Statistics said the UK will face an influx of at least 10 MILLION people by 2039, with around two-thirds of that figure coming from migration.

And those figures are the most optimistic – the Office of National Statistics admit that the recent ramping up of immigration to unprecedented levels could see Britain’s population hit 80 MILLION in the next 25 years. This would see 20 MILLION more cars, which is almost 60% more than currently use the nation’s roads.

New Home Office figures have also revealed that in the last 12 months alone, there were 636,000 new arrivals into the UK and the net migration figure of 336,000 is the biggest yet.

The increase is equivalent to an extra 920 people arriving in the UK every day. The statistics also reveal how 50,000 migrants flocked to the UK from Bulgaria and Romania alone.

As well as the huge number of vehicles hitting the roads even at the conservative prediction of 70 million residents, Britain will need an astonishing 4,000 new schools and 26 more hospitals, just to keep pace.

This is on top of the nation’s ongoing housing crisis, which will be alleviated by paving over the countryside, with new garden cities built up and down the UK.

Simon Ross of the pressure group Population Matters, said housing was potentially the biggest threat facing the next generation of Britons amid the population increase.

He said: “Britain already has the smallest new builds in Europe – pokey flats with no gardens – and that’s because of land prices with England being the most densely populated country in Europe.

“More people will result in house prices going up even further. The population increase will see those with the most money being okay but those poorly paid being forced out of town and facing longer commutes.

“The solution is to develop lots of high-rise flats and turn playing fields and gardens into homes, or building garden cities like that in Ebbsfleet in Kent.

“That will make things much less pleasant. And, in cities, instead of today’s suburbs, we’ll be like Hong Kong, with a lot less green spaces.

“And that will impact heavily on people’s lives.”

The ONS projection is for Britain’s population to explode from 64.6 million last year to 74.3 million in 24 years time.

That shocking figure may be even higher as the ONS calculation has not taken into account the current extreme global migrant crisis.

It has admitted the real figure could even be as high as 80 MILLION, making Britain the most populous nation in Europe.

Mr Ross said hospitals and schools were two more major problems in the face of a population boom.

The country is already facing pressures in both areas.

Now, grim projections show the number of schools in the country would need to rise from the current 24,000 to nearly 28,000, based on Express.co.uk projections for a 10 million population increase.

And Britain, which now has 168 acute hospital trusts, would also need at least another 26 more to cater for the increase – but most likely many more due the ageing nation.

Mr Ross said: “Hospitals and schools are already a problem. Parents are finding it difficult for children to get into their chosen schools, while there are long waits at A&E and for doctor appointments.

“There will be lots more demand with 10 million people plus and the average age going up.

“Lots more schools and hospitals will need to be built but the problem is where is the space and will we be able to afford them?” 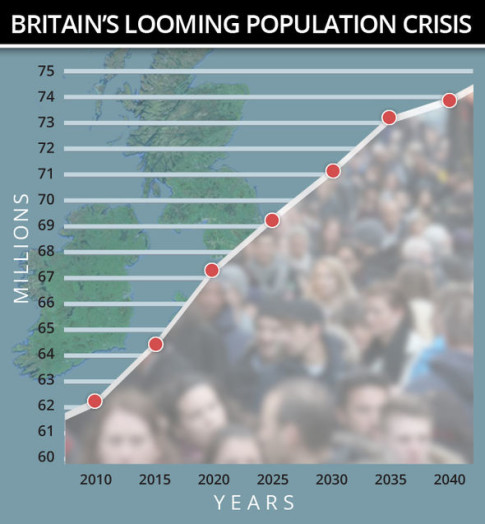 Another 23 prisons would also have to be built to cater for the rise in people in Britain, the Express.co.uk research found.

The Department for Transport admits its forecasts show there could be between six million and 10 million more cars on the road by 2040 than there are currently.

David Metz of the Centre for Transport Studies at University College London said £15billion earmarked for road building by the Treasury could help mitigate this but it’s not currently tied in with the latest population projections.

The introduction of new towns up and down Britain to deal with the growth in population will result in wider and longer roads across the country’s rural areas.

Mr Metz said: “It depends where the extra people will live. If they are to be housed on greenfield land they would want cars and then the Government would have to invest in roads.”

Road groups have also expressed concern. A spokesman for the RAC said the population figures highlight “the need for continued long term planning for the roads network”.

The required massive road building operation would come at a time when huge concerns are being raised on the High Speed 2 train line, with many raising worries over its environmental impact.

Population Matters also believes Britain will have to increase its agricultural industry due to a rising global population meaning other nations will want to keep food rather than exporting.

But a huge problem will come in the form of energy use due to the rise in demand. Controversial fracking is one way to deal with this, especially to avoid Britain being over-reliant on Russian oil.

Mr Ross said: “We can expect to see both fracking, as well as wind farms used more, to deal with this issue.”

A lack of water is another major concern, especially in the south-east of England, which is already struggling with a rapidly increasing population.

Mr Ross said: “A possibility is getting pipes to bring the water in from Wales but the cost of this would be enormous.”

The argument expensive infrastructure would be paid for by an increase in taxes coming from a larger working population is dismissed by Population Matters which argues the majority of immigrants will be on low paid jobs.

Likewise the group also dismisses the view a younger incoming population will mitigate the fact Britons are ageing, pointing out more young people will just put the problem off for future generations to deal with.

Mr Ross said: “Bringing in more and more young people is not the answer to the problem. It just means more old people in years to come.”

Government departments have individually responded to fears raised over the population increase but questions will remain about whether enough is planned.

– The Department for Education has said it is putting aside £7bn towards increasing the number of school places in the next six years.

– The Department of Communities and Local Government insists it is working to address the housing crisis.

A spokesman said: “We are building the homes for future generations and have got Britain building again, with latest figures showing a 25 per cent increase in the number of new homes over the past year.

“The Housing Bill will allow us go even further, by kick-starting a national crusade with our ambition to get one million homes built by 2020.”

– The Ministry of Justice rejected the projection of 23 prisons. A spokesman for the MoJ said: “We do not recognise this figure.

“We will always ensure there are enough prison places for those who are sentenced to custody by the courts.”

– The Department of Transport said it constantly builds its own future forecasts and currently it believes between six and 10 million cars will be on the roads by 2040. It pointed out it was spending £15billion on road building by the end of the decade. That will see more than 100 roads invested in.

The RIS scheme includes a “£300 million environmental fund to mitigate carbon emission” and plans to “create new charge points for low emission vehicles every 20 miles across the road network”.

It also says it will spend on enhancing “landscape, protect sites of cultural or historic heritage, and reduce the impact of improving our roads on wildlife, countryside and habitats”.