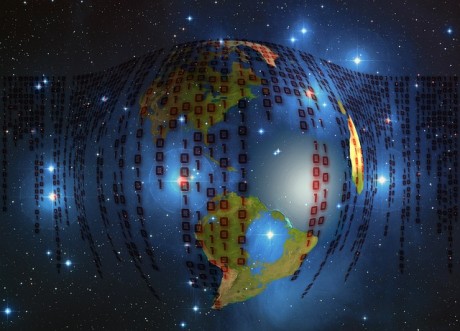 I was absolutely stunned to learn that the Baltic Dry Shipping Index had plummeted to a new all-time record low of 504 at one point on Thursday.  I have written a number of articles lately about the dramatic slowdown in global trade, but I didn’t realize that things had gotten quite this bad already.  Not even during the darkest moments of the last financial crisis did the Baltic Dry Shipping Index drop this low.  Something doesn’t seem to be adding up, because the mainstream media keeps telling us that the global economy is doing just fine.  In fact, the Federal Reserve is so confident in our “economic recovery” that they are getting ready to raise interest rates.  Of course the truth is that there is no “economic recovery” on the horizon.  In fact, as I wrote about yesterday, there are signs all around us that are indicating that we are heading directly into another major economic crisis.  This staggering decline of the Baltic Dry Shipping Index is just another confirmation of what is directly ahead of us.

Overall, the Baltic Dry Index is down more than 60 percent over the past 12 months.  Global demand for shipping is absolutely collapsing, and yet very few “experts” seem alarmed by this.  If you are not familiar with the Baltic Dry Shipping Index, the following is a pretty good definition from Investopedia…

A shipping and trade index created by the London-based Baltic Exchange that measures changes in the cost to transport raw materials such as metals, grains and fossil fuels by sea. The Baltic Exchange directly contacts shipping brokers to assess price levels for a given route, product to transport and time to delivery (speed).

The Baltic Dry Index is a composite of three sub-indexes that measure different sizes of dry bulk carriers (merchant ships) – Capesize, Supramax and Panamax. Multiple geographic routes are evaluated for each index to give depth to the index’s composite measurement.

It is also known as the “Dry Bulk Index”.

Much of the decline of the Baltic Dry Shipping Index is being blamed on China.  The following comes from a Bloomberg report that was posted on Thursday…

The cost of shipping commodities fell to a record, amid signs that Chinese demand growth for iron ore and coal is slowing, hurting the industry’s biggest source of cargoes.

The Baltic Dry Index, a measure of shipping rates for everything from coal to ore to grains, fell to 504 points on Thursday, the lowest data from the London-based Baltic Exchange going back to 1985. Among the causes of shipowners’ pain is slowing economic growth in China, which is translating into weakening demand for imported iron ore that’s used to make the steel.

So many of the exact same patterns that we witnessed back in 2008 are playing out once again in front of our very eyes.  Below, I have shared a chart that was posted by Zero Hedge, and it shows how the Baltic Dry Shipping Index absolutely collapsed in 2008 as we headed into a major financial crisis.  Well, now the Index is collapsing again, and it is already lower than it was at any point back in 2008… 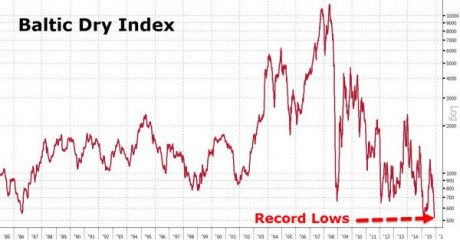 The evidence continues to mount that we are steamrolling toward a deflationary economic slowdown that is worldwide in scope.

The price of oil collapsed just before the financial crisis of 2008, and the same pattern is happening again.

And look at what is happening to commodities. The Thomson Reuters/CoreCommodity CRB Commodity Index has plummeted to the lowest level that we have seen since the last recession. It is now down more than 30 percent over the past 12 months, and it continues to fall.

So don’t be fooled by the temporary “stock market recovery” that we have witnessed.  The underlying economic fundamentals continue to decline.  We are entering a global deflationary recession, and the stock market will get the memo at some point just like we saw in 2008.

At this moment, global financial markets are teetering on the brink, and all it is going to take is some kind of major trigger event to send them tumbling over the edge.

And such an event may be coming sooner than you may think.

We live at a time when global terrorism is surging, relationships between nations are deteriorating and our planet is shaking in wild and unpredictable ways.

It wouldn’t take much to push the financial world into full-blown panic mode.  A major regional war in the Middle East, a terror attack that kills thousands, or an earthquake or volcanic eruption that affects a large U.S. city are all potential examples of “black swan events” which could fit the bill.

The global financial system has never been more primed for another 2008-style crisis.  Thanks to the fragility of the system, it could literally happen any day now.

So keep your eyes open – within weeks our world could be completely and totally different.