– Something Very Strange Is Taking Place Off The Coast Of Galveston, TX:

Having exposed the world yesterday to the 2-mile long line of tankers-full’o’crude heading from Iraq to the US, several weeks after reporting that China has run out of oil storage space we can now confirm that the global crude “in transit” glut is becoming gargantuan and is starting to have adverse consequences on the price of oil.

While the crude oil tanker backlog in Houston reaches an almost unprecedented 39 (with combined capacity of 28.4 million barrels), as The FT reports that from China to the Gulf of Mexico, the growing flotilla of stationary supertankers is evidence that the oil price crash may still have further to run, as more than 100m barrels of crude oil and heavy fuels are being held on ships at sea (as the year-long supply glut fills up available storage on land). The storage problems are so severe in fact, that traders asking ships to go slow, and that is where we see something very strange occurring off the coast near Galveston, TX.

FT reports that “the amount of oil at sea is at least double the levels of earlier this year and is equivalent to more than a day of global oil supply. The numbers of vessels has been compiled by the Financial Times from satellite tracking data and industry sources.”
The storage glut is unprecedented:

Off Indonesia, Malaysia and Singapore, Asia’s main oil hub, around 35m barrels of crude and shipping fuel are being stored on 14 VLCCs.
“A lot of the storage off Singapore is fuel oil as the contango is stronger,” said Petromatrix analyst Olivier Jakob. Fuel oil is mainly used in shipping and power generation.
Off China, which is on course to overtake the US as the world’s largest crude importer, five heavily laden VLCCs — each capable of carrying more than 2m barrels of oil — are parked near the ports of Qingdao, Dalian and Tianjin.
In Europe, a number of smaller tankers are facing short-term delays at Rotterdam and in the North Sea, where output is near a two-year high. In the Mediterranean a VLCC has been parked off Malta since September.
On the US Gulf Coast, tankers carrying around 20m barrels of oil are waiting to unload, Reuters reported. Crude inventories on the US Gulf Coast are at record levels.
A further 8m barrels of oil are being held off the UAE, while Iran — awaiting the end of sanctions to ramp up exports — has almost 40m barrels of fuel on its fleet of supertankers near the Strait of Hormuz. Much of this is believed to be condensate, a type of ultralight oil.

And unlike the last oil price collapse during the financial crisis only half of the oil held on the water has been put there specifically by traders looking to cash in by storing the fuel until prices recover. Instead, sky-high supertanker rates have prevented them from putting more oil into so-called floating storage, shutting off one of the safety valves that could prevent oil prices from falling further. 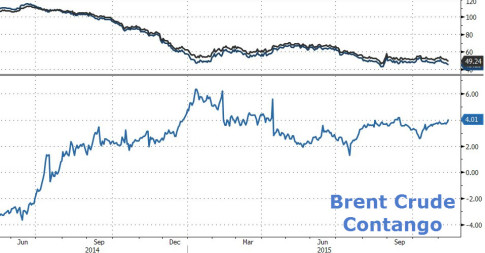 The difference between Brent for delivery in six months’ time and now rose to $4.50 last week, up from $1.50 in May. Traders estimate it may need to reach $6 to make sea storage viable.

JBC Energy, a consultancy, said in many regions onshore oil storage is approaching capacity, arguing oil prices may have to fall to allow more to be stored profitably at sea.

“Onshore storage is not quite full but it is at historically high levels globally,” said David Wech, managing director of JBC Energy.
“As we move closer to capacity that is creating more infrastructure hiccups and delays in the oil market, leading to more oil being backed out on to the water.”
Patrick Rodgers, the chief executive of Euronav, one of the world’s biggest listed tanker companies, said oil glut was so severe traders were asking ships to go slow to help them manage storage levels.
“We are being kept at relatively low speeds. The owners of the oil are not in a hurry to get their cargoes. They are managing their storage capacity by keeping ships at a certain speed.”

As a result of all this, something very unusual going on off the coast of Galveston, where more than 39 crude tankers w/ combined cargo capacity of 28.4 million bbls wait near Galveston (Galveston is area where tankers can anchor before taking cargoes to refineries at Houston and other nearby plants), vessel tracking data compiled by Bloomberg show, which compares w/ 30 vessels, 21 million bbls of capacity in May. Vessels wait avg of 5 days, compared w/ 3 days May.

As AP puts it, “a traffic jam of oil tankers is the latest sign of an unyielding global supply glut.”

More than 50 commercial vessels were anchored outside ports in the Houston area at the end of last week, of which 41 were tankers, according to Houston Pilots, an organization that assists in navigation of larger vessels. Normally, there are 30 to 40 vessels, of which two-thirds are tankers, according to the group.
Although the channel has been shut intermittently in recent weeks because of fog or flooding, oil traders pointed to everything from capacity constraints to a lack of buyers.
“It appears that the glut of supply in the global market is only getting worse,” said Matt Smith, director of commodity research at ClipperData. Several traders said some ships might have arrived without a buyer, which can be hard to find as ample supply and end-of-year taxes push refiners to draw down inventories.

And here, courtesy of MarineTraffic is the interactive snapshot (readers can recreate it here): 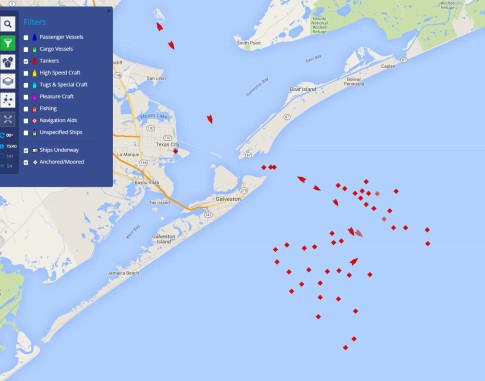 All of which explains why this is happening: 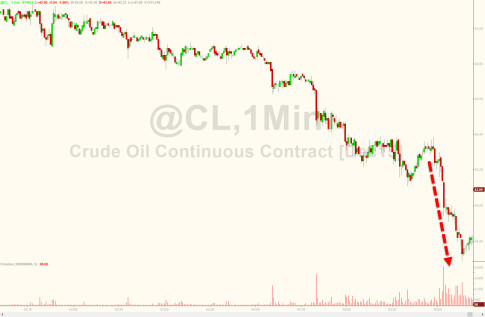