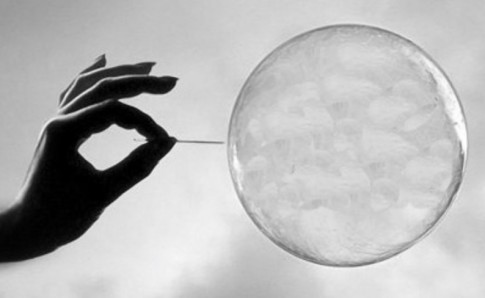 It appears the music may have finally stopped for one of the world’s largest luxury real estate bubbles: London.

It’s well known that foreign oligarchs love London real estate as a means to launder funds, typically “earned” by soaking their host countries dry via corruption and fraud. This has caused absurd and irrational spikes in high-end residential real estate in the English capital, as well as a flood of new construction.

With emerging markets now completely collapsing, the seemingly endless flood of foreign money is drying up, and with it, London real estate.

So has the London real estate bubble popped? Probably.

Now we see the following from Bloomberg:

London’s most expensive homes and apartments have slumped in value as the government’s stamp duty sales tax damps demand.

Prices of homes valued at 5 million pounds ($7.6 million) or more fell 11.5 percent on a per square foot basis from the third quarter of 2014, according to Richard Barber, a director at broker W.A. Ellis LLP, a unit of Jones Lang LaSalle Inc. Sales volumes across all homes in the best parts of central London dropped 14 percent in the period, the realtor said on Thursday.

“The bubble may already have burst” for the most expensive homes, Barber said. Now, “36 percent of all properties currently on the market across prime central London are being marketed at a lower price than they were originally listed at, with the average reduction in price being 8.5 percent.”