– US To Send “Thousands” Of Troops, Attack Helicopters, Artillery, To Europe To “Deter Russia”

On Sunday, we highlighted a keynote speech delivered in California last week at the Reagan National Defense Forum by a man who isn’t afraid to venture into the “danger zone” (so to speak): 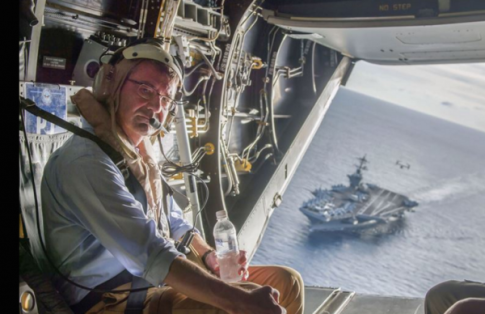 Yes, that’s Ash Carter in a V-22 Osprey hovering above the USS Theodore Roosevelt and that rather hilarious snapshot was taken just days before the Pentagon boss warned that Moscow may intend to nuke the US (and no, that’s not us being hyperbolic, he actually suggested that) and that Washington needs to be careful to monitor China’s “rise.”

This all comes against a backdrop of absurd sabre rattling from all sides when it comes to The South China Sea and the Baltics and frankly, it would be pure political comedy gold were it not for the fact that things have recently taken a turn for the very serious now that it looks like US spec ops could end up in a shootout with the Russians and Hezbollah near Aleppo and/or with the Iranians near Raqqa, depending on where Washington decides to place its Syrian field “advisors.”

But despite the fact that Russia has built an airbase at Latakia and looks set to literally take over the Mid-East alongside the Ayatollah, those “in the know” seem to think that the bigger threat is in Eastern Europe where NATO is hell bent on “countering” Russian “aggression,” even though to the extent The Kremlin is being “aggressive”, it certainly seems like Putin is taking it out on Sunni militants in the desert and not on far-right volunteer battalions in Ukraine.

Concerns about the potential for an epic Baltics battle have prompted officials to conduct a series of war games in an effort to determine the likely outcome, and as we noted a few months ago, the US loses everytime.

Well, in an effort to ameliorate that, “senior U.S. military leaders have proposed sending more forces into Europe on a rotating basis to build up the American presence and are stepping up training exercises to counter potential Russian interference with troop transfers in the event of a crisis with Moscow,”WSJ reports, citing the same conference Carter spoke at last week. Here’s more:

The new steps would allow for the presence of multiple U.S. brigades in Europe at any given time, increasing that number above current limits.

Gen. Philip Breedlove, the supreme allied commander of the North Atlantic Treaty Organization, said he would like to see more brigades committed to Europe as rotational forces. Decisions on the proposal, he said, will be made “in the next couple of months.” 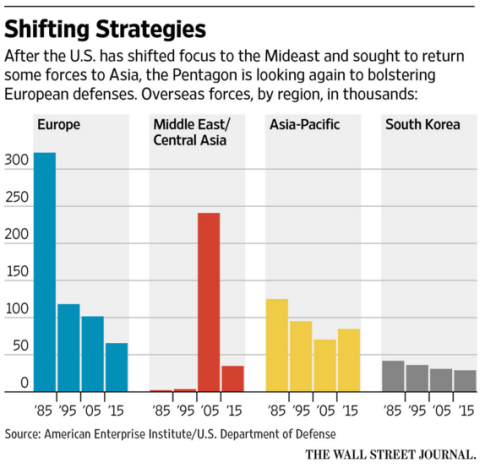 Gen. Mark Milley, the chief of staff of the U.S. Army, said the Army is refining its training to ensure the U.S. military is able to face threats posed by Russian forces, learning to counter hybrid war, which blends regular and irregular forces, propaganda and unconventional tactics to sow confusion. He also said he was in favor of sending more troops to deploy—on a temporary basis—to Europe.

Who knows what Milley means when he suggests that The Kremlin is trying to “sow confusion,” but the takeaway is that the rhetoric here is starting to sound like something out of 1939. Case in point:

Such moves, Gen. Milley said in an interview with The Wall Street Journal, are critical to ensure that no new conflict erupts in Europe.

“Aggression left unanswered is likely to lead to more aggression,” he said.

So basically, Milley is making a thinly veiled reference to the appeasement of Hitler. Back to WSJ:

The proposal for more rotating forces must be formally developed by Pentagon planners and then approved by the Obama administration and funded by Congress. The military will push for the inclusion of funding in a budget request to be sent to Capitol Hill early next year, officials said.

Russian officials declined to comment on Sunday. Senior Russian officials have repeatedly said there is little difference between rotational forces and a permanent buildup. They have also repeatedly accused the U.S. and NATO of being the aggressor in Europe.

“I fear that as we are dealing with Russia in Syria, the eyes are off the Donbas,” Gen. Breedlove said in an interview. “Why would we want our first negotiations on how we cooperate to be in Syria and then possibly allow the eyes of the world to accept what happened in Crimea?”

Yes, “why would we want” to de-escalate the situation in eastern Europe and waste a perfectly good chance to get into a shooting war there too? And here’s more on how deploying thousands of troops keeps “tensions” from “growing into a conflict”:

Defense officials said NATO would avoid massive troop buildups and instead rely on ways to get smaller numbers of troops forward from the U.S. both during a crisis and to prevent tensions from growing into a conflict.

The Army currently has two brigades—of about 3,500 soldiers each—based in Europe. It has assigned one additional brigade in the U.S. to serve as a regionally aligned force that will rotate into and out of Europe. Gen. Milley said he would like to add more brigades to those rotating to Europe, and add attack helicopter units, engineering teams and artillery brigades.

As you can see, this situation is getting more tenuous virtually by the day. Washington is now talking about sending “attack helicopter units” and “artillery brigades” to the Baltics as though the US is already at war. To be sure, Russia isn’t innocent in all of this – we’ve said that on any number of occasions. But NATO’s perpetuation of the idea that we’ve turned the clock back the 60s, 70s, and 80s is starting to become something of a self-fulfilling prophecy and on that note, we’ll close with one more comment from Milley who explains that while “nobody wants to go back… to the Cold War,” that’s actually “exactly what we should be doing”:

“Nobody wants to go back to the days of the Cold War,” Gen. Milley said. “We don’t need exercises as big as Reforger anymore. But the concept of Reforger, where you exercise contingency forces … that is exactly what we should be doing.”

1 thought on “US To Send “Thousands” Of Troops, Attack Helicopters, Artillery, To Europe To “Deter Russia””