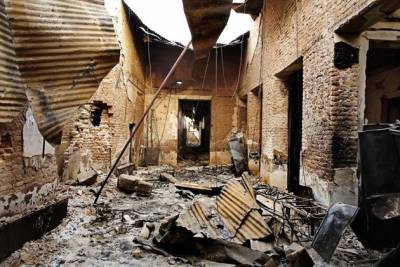 US is #1 at bombing hospitals – both the number and implementation

The medical humanitarian organization Doctors Without Borders released its internal report on Thursday about the October attack on its hospital in Kunduz, Afghanistan, and again cast doubt on the U.S. government’s insistence that the attack was not intentional.

The report, which found that the U.S.-led attack killed at least 30 people, describes in brutal detail the severity of the attack, noting that “patients burned in their beds” and that “medical staff were decapitated and lost limbs.”

The organization found that people were also killed while trying to flee the scene.

For example, the report noted that “a patient in a wheelchair attempting to escape from the inpatient department … was killed by shrapnel from a blast.”

It also revealed that U.S. planes shot at staff members fleeing the hospital.

“Many staff describe seeing people being shot, most likely from the plane, as people tried to flee the main hospital building that was being hit with each airstrike,” the report said. “Some accounts mention shooting that appears to follow the movement of people on the run. [Doctors Without Borders] doctors and other medical staff were shot while running to reach safety in a different part of the compound.”

Although the review isn’t finished, Doctors Without Borders President Dr. Joanne Liu said the organization released the report to “counter speculation and to be transparent.”

he attack occurred as U.S. forces were attempting to reclaim the city from the Taliban. A week before the bombing, the Taliban had captured Kunduz – the first time the group had taken a major urban center in almost 15 years.

The U.S. government apologized for the airstrike last month, claiming it was a mistake, and launched an investigation. But Doctors Without Borders, also called Médecins Sans Frontières, or MSF, has called it a war crime and demanded a humanitarian investigation.

“The question remains as to whether our hospital lost its protected status in the eyes of the military forces engaged in this attack – and if so, why,” the report stated. “The answer does not lie within the MSF hospital. Those responsible for requesting, ordering and approving the airstrikes hold these answers.”

“Being a doctor in a war zone cannot be punishable by airstrikes,” Doctors Without Borders General Director Christopher Stokes added.

The organization said the hospital was “fully functioning” on the night of the attack, treating over 100 patients. The facility, which opened in 2011, was the only one of its kind in the region and had performed more than 15,000 surgeries since its opening, the report said. It was also “one of the only buildings in the city that had full electricity from generator power on the night of the airstrikes.”

Hospitals are generally protected under international combat laws, and Doctors Without Borders had pushed to identify its Kunduz facility as a hospital. On the night before the attack, the group said, “two MSF flags were placed on the roof of the hospital, in addition to the existing flag that was being flown at the entrance to the Trauma Centre.”

Even before that, MSF had made its location known to military forces in Kunduz. A few days before the attack, as violence in the region had begun to heighten, MSF officials gave the GPS coordinates of the hospital to U.S. and Afghan military leaders as a precaution, the report revealed.

“The facts inside the hospital speak for themselves,” Stokes said. “The facts, in our view, demand a reaffirmation of the basic rules of war.”

Explosions from the attack rocked the northeastern Afghan city in the middle of the night on Oct. 3. It was the 12th U.S. airstrike in the area in a five-day period.

During the hourlong attack, hospital staff made 18 distress calls and texts to officials in both Afghanistan and the U.S.

The report provides a timeline of this communication. At 2:19 a.m., MSF first contacted U.S. military officials in Afghanistan about the initial airstrike. The organization did not receive a response until 2:52, according to the report.

“I’m sorry to hear that, I still do not know what happened,” a U.S. official replied.

At 2:59, after MSF informed the U.S. official that it expected “heavy casualties” from the airstrikes, the official sent a text message that read: “I’ll do my best, praying for you all.” 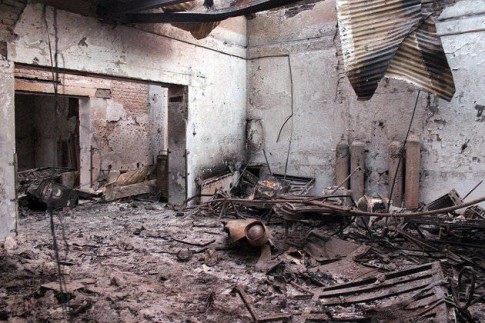