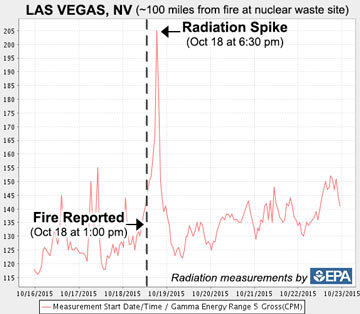 – EPA data shows radiation spike in major US city soon after explosions at nuclear waste facility nearby — AP: Drums of buried waste were blasted over site’s fence; Large crater reported — Emergency Official: US gov’t brought in “resources I’ve never even seen before, it was amazing” (VIDEO):

New York Times (AP), Oct 25, 2015 (emphasis added): Radioactive Dump That Burned in Nevada Had Past Troubles… State officials said this week they didn’t immediately know what blew up… A state fire inspector, Martin Azevedo, surveyed the site on Wednesday. His report, obtained Friday by The Associated Press, described moisture in the pit and “heavily corroded” 55-gallon drums in and around the 20-foot-by-30-foot crater. Debris from the blast spread 190 feet. Two drums were found outside the fence line… Nevada state emergency management chief Caleb Cage said operating records for the damaged trench… weren’t immediately available… [Former Nevada Governor Robert List] expressed doubt that anyone will ever know what’s really underground at the site. “Good luck with that,” he said. “What we found when we did our investigation was they had very, very skimpy records about what was there.”

Vance Payne, Director of Emergency Management for Nye County, Oct 20, 2015 Board of County Commissioners meeting (at 1:18:45 in): Our federal partners from DOE [US Dept. of Energy] put to bear resources I’ve never even seen before, it was amazing. The effort was nothing short of herculean. There was overflights of aircraft with special monitoring equipment that was put in the air just as fast as they were able — when the weather cleared a little bit — and they did it on the ground. The CST team, the Civil Support Team, came down from Reno and they came down in a hurry — it was amazing how fast they moved their teams. They did ground testing, they did mid-level aerial testing, and they did high-level area testing over the towns of Amargosa and Beatty — as well as the entire transportation line north to south on Highway 95 and 373. So I can tell you that No. 1, it was amazing. I can tell you that a lot of effort was put into making sure that our county and communities were as safe as we could probably make them. This morning we’re getting additional reports coming in, and they’ll continue to come in on the testing over the next few weeks. No radioactive materials were detected anywhere on the ground or in the air.

KTNV Las Vegas, Oct 19, 2015 (at 0:45 in): Preliminary air quality tests say the air is fine — but Nye County officials aren’t trusting just that — more extensive surveys are being done, and those results could take days.

1 thought on “EPA data shows radiation spike in major US city soon after explosions at nuclear waste facility nearby — AP: Drums of buried waste were blasted over site’s fence; Large crater reported — Emergency Official: US gov’t brought in “resources I’ve never even seen before, it was amazing””