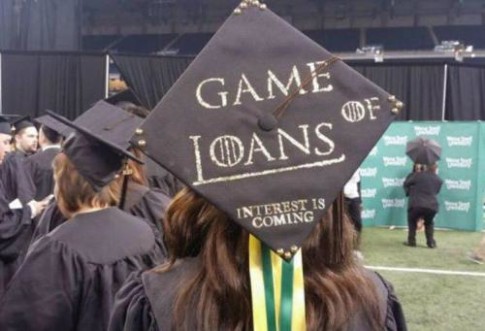 – Why Are Half Of All 25-Year-Olds Living With Their Parents? The Federal Reserve Answers:

Back in 1999, a quarter of all 25-year-olds lived with their parents. By 2013 this number has doubled, and currently half of young adults live in their parents home.

While the troubling implications for the economy from this startling increase are self-evident, and have been extensively discussed both here and elsewhere (and are among the key factors pushing both the US and global economy into secular stagnation), a just as important question is why are increasingly more young adults still living at home.

While we admit there is something morbidly grotesque in none other than the Fed taking an active interest in this most devastating development (for the simple reason that it has been the Fed’s own policies that have unleashed not only the $1.3 trillion wave of student debt but an army of Millennials in their parents’ basement), it is the Fed itself that has been the latest to attempt an answer.

Here is the Fed’s response to “Why Are More Young Adults Still Living at Home?”

Economist Maria Canon and Regional Economist Charles Gascon noted that many factors have been suggested for why young adults return to or continue living at home, including significant student debt, weak job prospects and an uncertain housing market. The table below breaks down the percentage of 25-year-olds who were living at home for the period 2012-2013 in each state in the Federal Reserve’s Eighth District as well as in the country as a whole. 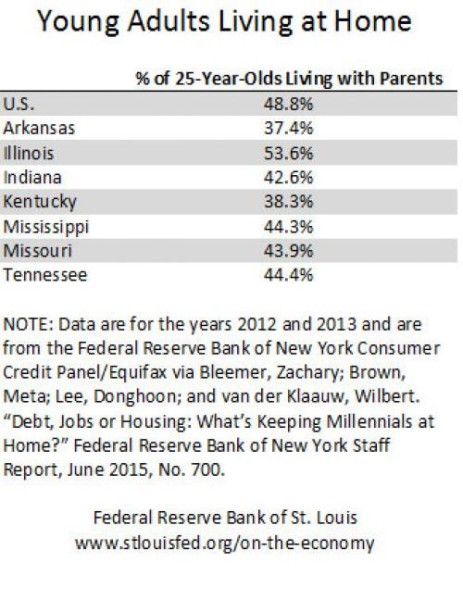 One potential reason for the increase in young adults living with their parents is the labor market. The authors highlighted research showing that individuals at the beginning of their careers often need more time to transition into the labor market. This is reflected in the unemployment rates of those between 21 and 27, which are often higher than for other age groups.

Earning a college degree can help with labor market outcomes, as young adults with a college degree are more likely to live independently. However, additional research has shown that the underemployment rate for recent graduates was about 40 percent during the Great Recession. Canon and Gascon noted: “An implication is that a significant portion of recent graduates were earning lower wages than what they should have been, given their education.”

Also affecting many young adults is that they started their post-education careers during a recession. Canon and Gascon discussed a study noting that those entering the job market during a recession pay a price for about a decade. They wrote: “That’s because they start work for lower-paying employers and slowly work their way up toward better-paying jobs.”

The nation’s recovery may also play a role in young adults remaining at home. As the economy has grown, so have house prices. Canon and Gascon pointed out that national house prices have increased 21 percent since 2012, and rental prices have grown even faster in many areas. They wrote: “Because most youth would be first-time homebuyers, they have no housing equity to regain from the rebound in house prices after the housing crash.”

According to a 2014 survey, more than half of first-time homebuyers said student loan debt was delaying saving for a down payment for a house. A 2015 report from the Federal Reserve Bank of New York found that a $10,000 increase in a student’s average debt increases the probability of living with parents or other family members by the age of 25 by about 2 percentage points.

To all the 25-year olds out there reading this from their parents’ basement, all we can add is that these are actually all correct. There is just one thing left to add: for all of the above you can thank, who else, the Fed for blowing the biggest debt-funded asset bubble in history.