– US On The Ropes: China To Join Russian Military In Syria While Iraq Strikes Intel Deal With Moscow, Tehran:

Last Thursday, we asked if China was set to join Russia and Iran in support of the Assad regime in Syria.

Our interest was piqued when the pro-Assad Al-Masdar (citing an unnamed SAA “senior officer”), said Chinese “personnel and aerial assets” are set to arrive within weeks. To the uninitiated, this may seem to have come out of left field, so to speak. However, anyone who has followed the conflict and who knows a bit about the global balance of power is aware that Beijing has for some time expressed its support for Damascus, most notably by voting with Russia to veto a Security Council resolution that would have seen the conflict in Syria referred to the Hague. Here’s what China had to say at the May 22, 2014 meeting:

For some time now, the Security Council has maintained unity and coordination on the question of Syria, thanks to efforts by Council members, including China, to accommodate the major concerns of all parties. At a time when seriously diverging views exist among the parties concerning the draft resolution, we believe that the Council should continue holding consultations, rather than forcing a vote on the draft resolution, in order to avoid undermining Council unity or obstructing coordination and cooperation on questions such as Syria and other major serious issues. Regrettably, China’s approach has not been taken on board; China therefore voted against the draft resolution.

In other words, China could see the writing on the wall and it, like Russia, was not pleased with where things seemed to be headed. A little more than a year later and Moscow has effectively called time on the strategy of using Sunni extremist groups to destabilize Assad and given what we know about Beijing’s efforts to project China’s growing military might, it wouldn’t exactly be surprising to see the PLA turn up at Latakia as well.

Sure enough, Russian media now says that according to Russian Senator Igor Morozov, Beijing has decided to join the fight. Here’s Pravda (translated):

According to the Russian Senator Igor Morozov, Beijing has taken decision to take part in combating IS and sent its vessels to the Syrian coast.

Igor Morozov, member of the Russian Federation Committee on International Affairs claimed about the beginning of the military operation by China against the IS terrorists. “It is known, that China has joined our military operation in Syria, the Chinese cruiser has already entered the Mediterranean, aircraft carrier follows it,” Morozov said.

According to him, Iran may soon join the operation carried out by Russia against the IS terrorists, via Hezbollah. Thus, the Russian coalition in the region gains ground, and most reasonable step of the US would be to join it. Although the stance of Moscow and Washington on the ways of settlement of the Syrian conflict differs, nonetheless, low efficiency of the US coalition acts against terrorists is obvious. Islamists have just strengthened their positions.

As Leonid Krutakov told Pravda.Ru in an interview, the most serious conflict is currently taking place namely between China and the US. Moscow may support any party, the expert believes, and that is what will change the world order for many years. 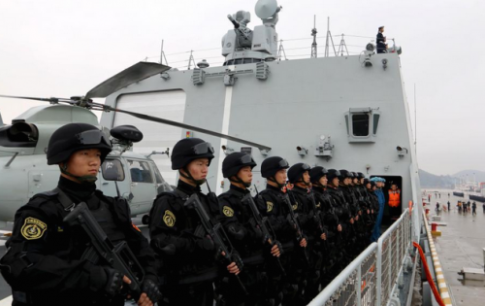 Clearly, one has to consider the source here, but as noted above, if Beijing is indeed set to enter the fray, it would be entirely consistent with China’s position on Syria and also with the PLA’s desire to take a more assertive role in international affairs.

Meanwhile, it now looks as though the very same Russian-Iran “nexus” that’s playing spoiler in Syria is also set to take over the fight against ISIS in Iraq, as Baghdad has now struck a deal to officially share intelligence with Moscow and Tehran. Here’s CNN:

Iraq says it has reached a deal to share intelligence with Russia, Iran and Syria in the fight against ISIS militants.

The announcement on Saturday from the Iraqi military cited “the increasing concern from Russia about thousands of Russian terrorists committing criminal acts within ISIS.”

The news comes amid U.S. concerns about Russia’s recent military buildup in Syria and would appear to confirm American suspicions of some kind of cooperation between Baghdad and Moscow.

We’d be remiss if we failed to note the significance here. The entire narrative is falling apart for the US, as Russia and Iran are now moving to transform the half-hearted Western effort to contain ISIS into a very serious effort to eradicate the group. Recall that just a little over a week ago, Quds Force commander Qassem Soleimani essentially accused the US of intentionally keeping Islamic State around so that the group can continue to advance Washington’s geopolitical agenda by serving as a destabilizing element in Syria. According to the Pentagon, Soleimani’s visit to Russia (which, you’re reminded, violated a UN travel ban and infuriated opponents of the Iran nuclear deal) was “very important” in terms of accelerating the timetable on Russia’s inevitable involvement in Syria. It is of course Soleimani who commands the Shiite militias battling ISIS in Iraq. Now, it appears that in addition to the cooperation in Syria, he has managed to secure a Russian-Iran partnership for Tehran’s Iraqi operations as well. Here’s GOP mouthpiece Fox News:

Russian, Syrian and Iranian military commanders have set up a coordination cell in Baghdad in recent days to try to begin working with Iranian-backed Shia militias fighting the Islamic State, Fox News has learned.

Western intelligence sources say the coordination cell includes low-level Russian generals. U.S. officials say it is not clear whether the Iraqi government is involved at the moment.

Describing the arrival of Russian military personnel in Baghdad, one senior U.S. official said, “They are popping up everywhere.”

While the U.S. also is fighting the Islamic State, the Obama administration has voiced concern that Russia’s involvement, at least in Syria, could have a destabilizing effect.

Moscow, though, has fostered ties with the governments in both Syria and Iraq. In May, Iraqi Prime Minister Haider al-Abadi flew to Moscow for an official visit to discuss potential Russian arms transfers and shared intelligence capability, as well as the enhancement of security and military capabilities, according to a statement by the Iraqi prime minister’s office at the time.

Iranian Quds Force commander Qassem Soleimani also was spotted in Baghdad on Sept 22. He met with Shia militias backed by Iran; intelligence officials believe he met with Russians as well. 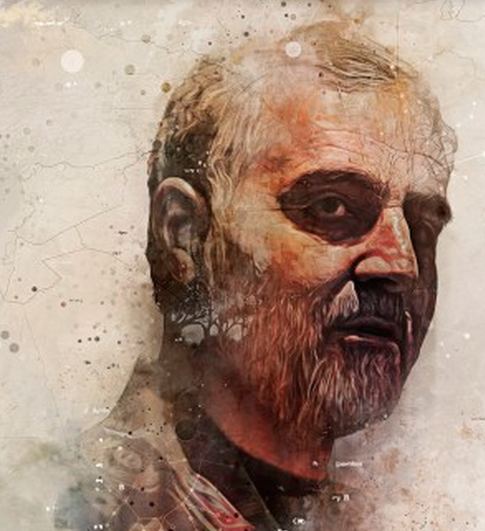 And here is ISW: 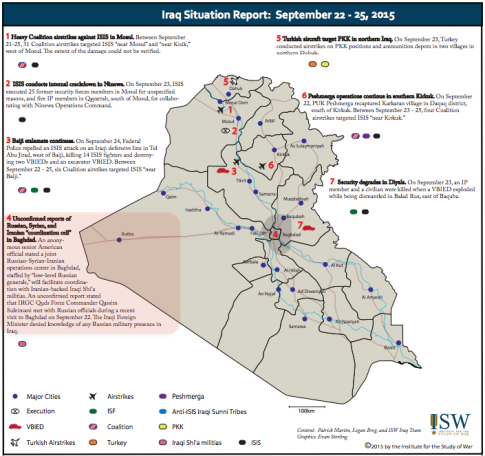 What appears to have happened here is this: Vladimir Putin has exploited both the fight against ISIS and Iran’s need to preserve the regional balance of power on the way to enhancing Russia’s influence over Mid-East affairs which in turn helps to ensure that Gazprom’s interests are protected going forward.

Thanks to the awkward position the US has gotten itself in by covertly allying itself with various Sunni extremist groups, Washington is for all intents and purposes powerless to stop Putin lest the public should sudddenly get wise to the fact that combatting Russia’s resurrgence and preventing Iran from expanding its interests are more imporant than fighting terror.

In short, Washington gambled on a dangerous game of geopolitical chess, lost, and now faces two rather terrifyingly disastrous outcomes: 1) China establishing a presence in the Mid-East in concert with Russia and Iran, and 2) seeing Iraq effectively ceded to the Quds Force and ultimately, to the Russian army.

1 thought on “US On The Ropes: China To Join Russian Military In Syria While Iraq Strikes Intel Deal With Moscow, Tehran”