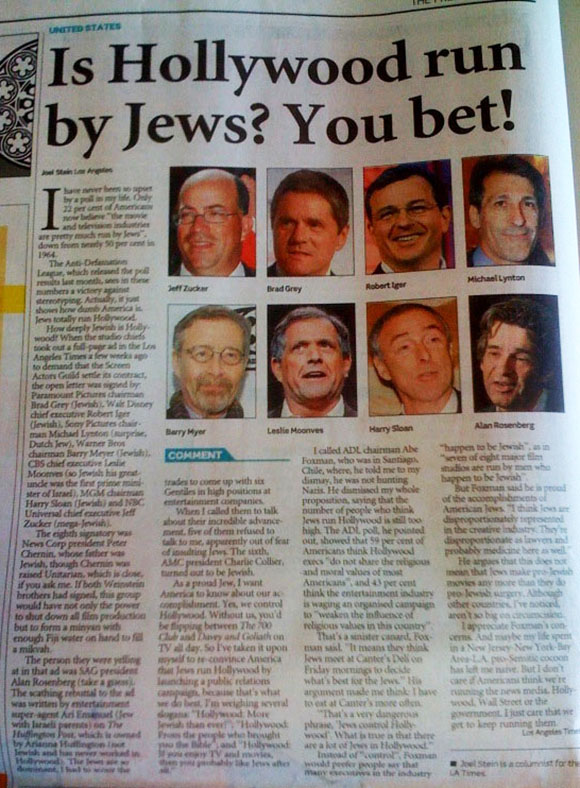 Ed-note (Sabba) The link for the New Observer article “Jews Boast of Owning Hollywood—But Slam Gentiles Who Say the Same” is below.

TIMES OF ISRAEL – Google on Friday removed a “direct answers” search result that replied “Jews” in response to the query: “Who runs Hollywood?”

The automatic first answer produced by the search also highlighted a link to a news story on the New Observer website headlined, “Jews Boast of Owning Hollywood—But Slam Gentiles Who Say the Same.” The site, which features sensationalist stories heavy on conspiracy theories, describes itself as “a free and independent news service designed to present current affairs without the spin of the controlled media.”

The same “Jews” answer was also produced for Google mobile searches, and also appeared when Google auto-completed a “Who Runs Hollywood?” search request. 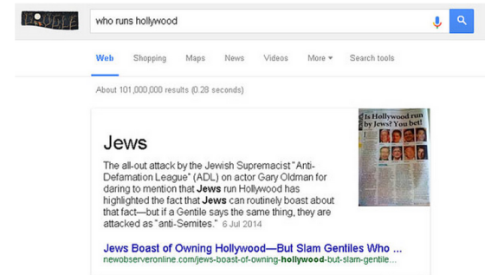 Google quickly issued a statement promising to deal with the problem, and noting “that the views expressed by such sites are not in any way endorsed by Google.” By Friday afternoon, Israel-time, the search was no longer producing the offensive result.

The problematic result did not appear to have been a function of deliberate outside skewing of Google’s algorithm, or Google bombing, but rather was evidently a consequence of lots of readers posing variations on the “Who Runs Hollywood?” question, and trending in relatively large numbers to the New Observer article and other like it.

Indeed, even after Google’s evident Friday recalibration, ordinary Google searches for the same question, “Who Runs Hollywood?” produced prominent links to such articles as “Travolta says Gay Jews run Hollywood” and “Is it true that Hollywood is run by Jewish people?” The top search results as of this writing, understandably, however, were several articles highlighting the whole “Who Runs Hollywood?” direct answers search result affair.