Following yesterday’s bloodbath (and the continued carnage around the world), AsiaPac stocks are lower with Japan unable to mount any sustained bounce despite every effort to lift JPY. The propaganda-fest is in full swing as Amari claims JPY is safe-haven asset and Aso denies any coordinated G7 response is being planned (which means they are all feverishly trying to figure out how to ‘save’ the world again from a 4-day stock drop). China is ugly with stocks down hard in the pre-open (CSI-300 -4.3%) as offshore Yuan depo rates spike to 22.9% – a record high – as liquidity outflows must be accelerating (as PBOC adds another CBNY150bn liquidity). China devalues Yuan 0.2% – most in 11 days. 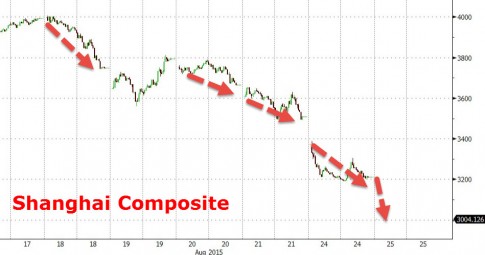 Chinese Stocks are down 14% since Friday!! 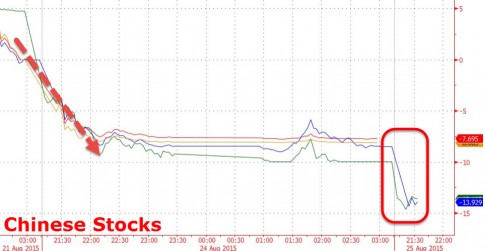 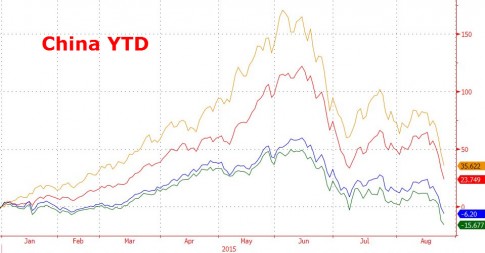 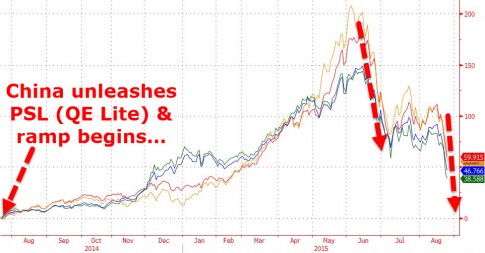 The Japanese are in full propaganda mode…

So we await the coordinated response to the global vicious circle of carry unwinds and forced liquidations… but remember, RRR cuts so far have done absolutely nothing to hold back wave after wave of frenzied malicious Chinese sellers just wanting out of the ponzi. 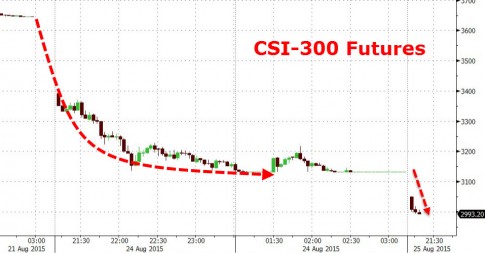 Some good news… China is deleveraging…

As China devalues Yuan by most in 11 days.. 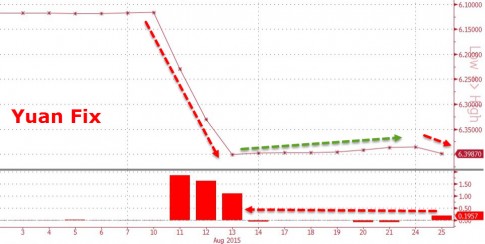 And China adds yet more liquidity…

The desperation to keep liquidity from flooding out is very evident: 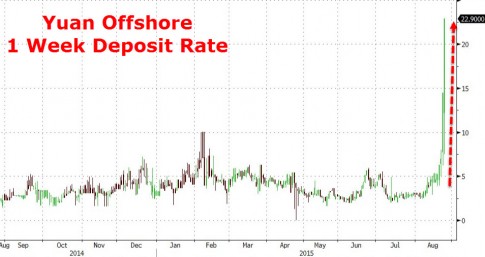 “Some are converting yuan back into USD or HKD amid the devaluation,’’ says Lawrence Kung, head of deposits department at Wing Lung Bank in Hong Kong

Hope continues for a huge broad-based RRR cut but The PBOC – just as it said – remains fixed on small targeted liquidity injections. This will not please the ‘people’ or Jim Cramer… “they know nothing.”

And finally, we could not have put it better than The Onion as they explain how the “Shoddy Chinese-Made Stock Market Collapses”…

Proving to be just as flimsy and precarious as many observers had previously warned, the Chinese-made Shanghai Composite index completely collapsed Monday, sources confirmed.

“Sure, it looked fine from the outside, but anybody who saw it up close knew that it was of such poor quality that it wasn’t built to last,” said Allen Sigman of the London School of Economics, adding that the stock market, which he described as a crude knockoff of Western versions, was practically slapped together overnight and featured countless obvious structural weak points.

“They pretty much ignored regulations, and inspections were a joke. The only surprise is that it didn’t fall apart sooner.” Sigman added that he just hopes there weren’t too many people who were hurt in the disaster.

We assume that is satire… though it does seem a little too real.