Brazil’s flagging economy, which is mired in stagflation and remains a slave both to China and to what looks like intractable political turmoil, has destroyed nearly 550,000 jobs YTD. As Barclays notes, ” [the July] print is compatible with 140,939 job eliminations, pretty close to the historical low of -154,355 in June.”

In more ways than one (or two, or three) Brazil is the poster child for the global emerging market unwind that, thanks to China’s yuan devaluation, has accelerated dramatically over the course of the last week.

To be sure, the combination of slowing demand from China, the (now lower) possibility of a Fed rate hike, and, perhaps most importantly, the end of the commodities supercycle which has seen prices crash to their lowest levels of the 21st century, would be more than enough to put Latin America’s most important economy into a tailspin.

But unfortunately, a political crisis stemming from allegations of fiscal book cooking and corruption charges tied to Petrobras where President Dilma Rousseff was chairwoman for seven years have exacerbated the country’s woes and recently, Brazilians went (back) to the streets by the hundreds of thousands to call for Rousseff’s impeachment. 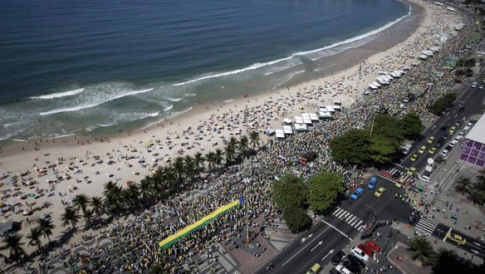 The fallout for the real economy has been catastrophic and indeed Brazilians suffered through the worst growth-inflation outcome (i.e. stagflation) in over a decade during Q2. Whether or not Rousseff can survive (politically speaking, we hope) and whether or not the government can hit primary fiscal surplus targets is an open question, but as we noted on Thursday, the populace is under tremendous pressure in the meantime with unemployment rising for a seventh consecutive month and soaring to its highest level in half a decade in July.

On that note, we bring you the following chart and commentary from Barclays which underscores precisely what we said last month, namely that Brazil may well be in the midst a depression:

Sector-wise, the industrial and retail sectors accumulate the largest job eliminations, which together sums up to 454k. The construction sector follows with a job destruction of 152k, and the only positive highlight is the agricultural sector, which created 99k formal jobs (Figure 2).

The magnitude of the deterioration of the labor market continues to surprise in Brazil. This week the unemployment rate rose by the fastest pace in the historical series, with the data showing that even more people are looking for job positions, however without finding them (see Brazil unemployment rate: Increased pace of deterioration).

The consequence of this is an even more prolonged recession, as disposable income falls and household consumption contracts. Coupled with business confidence indexes for August showing further drops to minimum-lows, this suggests that the worst in terms of growth is still ahead of us.

Which means that BofAML is exactly right to say that out of all the charts one cares to examine for Brazil, the most important one may ultimately be this: 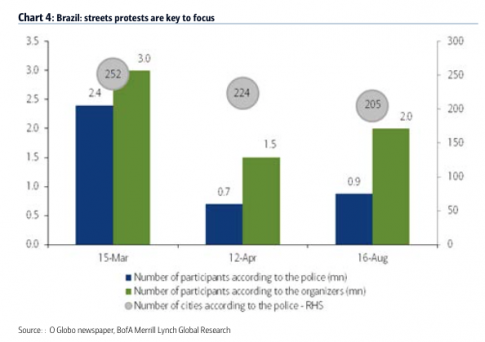