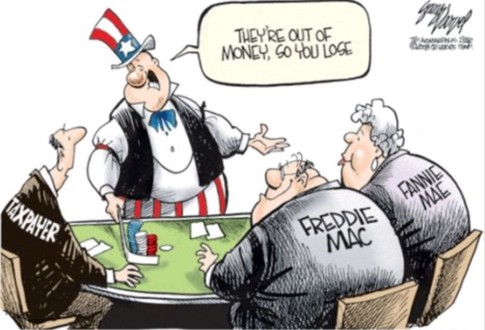 – New York Times Reports – “Fannie and Freddie are Back, Bigger and Badder Than Ever” (Liberty Blitzkrieg, July 22, 2015):

Just in case you still harbored any doubt that absolutely zero lessons were learned from the cataclysmic financial collapse of 2008/09. We learn from the New York Times that:

AFTER the financial crisis of 2008, there was one thing that almost everyone agreed on. The government-sponsored mortgage giants, Fannie Mae and Freddie Mac, had to go. While shareholders and executives reaped the profits from Fannie and Freddie in good times, taxpayers were stuck with the bill in a crisis. President Obama described their dysfunctional business model as “Heads we win, tails you lose.” But here we are, seven years after the crisis, and nothing has changed.

In the 2008 crisis, when it looked as if Fannie and Freddie might go bankrupt, Henry M. Paulson Jr., then the Treasury secretary, argued that their fall would cause economic catastrophe. Foreign investors, stuck with their securities, would panic, and the mortgage market would shut down. So Fannie and Freddie were put into something called conservatorship, and are now government controlled, supported by a line of credit from the Treasury.

Conservatorship was supposed to be temporary — a “time out,” according to Mr. Paulson. We were going to stabilize the companies’ finances, reduce their importance to the mortgage market, and figure out a better system. But nothing happened. In fact, the situation has gotten even more precarious. In the years since the crisis, private lenders, for the most part, have been willing to make mortgages if they can immediately sell them to government agencies, mainly Fannie and Freddie. In other words, without Fannie and Freddie, there wouldn’t be much of a mortgage market.

To make things worse, the government decided to “sweep” almost all the duo’s profits into its own coffers, to be used as a slush fund for general government expenses. As Treasury Secretary Jacob J. Lew said in congressional testimony this spring, “As a practical matter it’s what has helped us reduce our overall deficit.” If there is another downturn in the real estate market and Fannie and Freddie suffer losses on their some $5 trillion in outstanding securities, taxpayers will again have to foot the bill.

What do you expect to happen when the people responsible for running the economy into the ground are rewarded with bailouts and deemed “Too Big to Jail?”