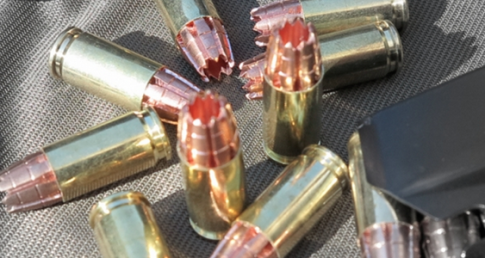 –  US Army May Use Hollow Points In New Pistols In Violation Of International Protocol (ZeroHedge, July 13, 2015):

A few months back, when “boots on the ground” trial balloons were floating around Washington, one argument made for sending so-called “forward spotters” to Iraq and possibly to Syria was that US airstrikes against ISIS needed to be made more efficient and more precise in order to minimize collateral damage.

As a reminder here’s an excerpt from a Bloomberg piece published on May 22:

Conducting precision airstrikes that avoid civilian casualties is more difficult without spotters using laser designators and other tools to guide them, particularly in and around cities, said a State Department official who spoke under ground rules requiring anonymity.

“Seventy-five percent of the sorties we are currently running with our attack aircraft come back without dropping bombs, mostly because they cannot acquire the target or cannot properly identify the target,” he said. “Forward air controllers fix that problem.”

As we noted at the time, carefully worded trial balloons don’t get much better than that. You see, the problem is that we are accidentally killing innocent children on our bombing runs and that’s if we’re lucky enough to be able to drop any bombs at all which apparently we only do a quarter of the time, and the whole “problem” could be “fixed” by deploying a couple of “spotters” with laser pointers.

Interestingly, officials seem to pay quite a bit more attention to collateral damage when citing civilian casualties can serve as a means to an end – an end like invading Syria, a state which is ripe for ‘regime change.’

Conversely, when a drone strike vaporizes a ‘high value’ target from the stratosphere and a few innocents turn up in the smoldering wreckage, well, that’s just the cost of doing business if you’re the CIA.

In that context, we thought it was interesting that the US Army is considering using hollow point ammunition in their new standard issue handguns on the premise that doing so will reduce civilian casualties. Fragmenting ammunition does a lot more damage and thus has more “stopping power” than full metal jacket ammo, so one might reasonably suspect that the Army’s goal in giving every soldier a magazine full of hollow points is simply to increase the kill rate. Not so, says the Army – it’s all about preventing collateral damage. Here’s Army Times with more:

The Army is considering the use of expanding and fragmenting ammunition, such as hollow point bullets, to increase its next-generation handgun’s ability to stop an enemy.

After a recent legal review within the Pentagon, the Army can consider adopting “special purpose ammunition,” said Richard Jackson, special assistant to the Army Judge Advocate General for Law of War, according to an Army news release. This marks a departure from battlefield practices over a century old.

Jackson told Army Times that while this isn’t the first approved use of such bullets in the military, the stance represented “a significant re-interpretation of the legal standard” for ammunition. He also said a lot has changed since the initial movements against the round, especially with the increased prevalence of asymmetric warfare.

Most of the Army uses full metal jacket, or ball ammunition, in both handguns and rifles. These rounds are designed to hold together, increasing penetration and narrowing the tunnel of damaged tissue.

Expanding and fragmenting bullets can flatten or break apart, and are more likely to remain in the body of a target and transfer all of their energy to it. A wider swath of tissue is typically destroyed.

On the battlefield, the U.S. has generally observed the 1899 Hague Convention rule barring expanding and fragmenting rounds, despite the fact that it never has been signatory to that particular agreement, Russell said.

The U.S. reserved the right to use different ammunition where it saw a need. For example, Criminal Investigations Command and military police use hollow points — as do law enforcement agencies around the country — in part to minimize collateral damage of bullets passing through the target. Special Forces also uses expanding/fragmenting rounds in counter-terrorism missions.

“The use of this ammunition supports the international law principles of preventing excessive collateral effects and safeguarding civilian lives,” an Army statement said.

So the US never signed up for this ban on special purpose ammo and always reserved the right to use it “where it saw the need”, which apparently is now everywhere.

Note that the Hague Convention rule wasn’t something that was adopted for no reason. The ban on non standard rounds was put in place because, again quoting the Army Times, “the bullets caused unnecessary and therefore inhumane injury unrelated to stopping a combatant from continuing to fight.”

After reading the above, you might be tempted to think that this is yet another example of the US simply ignoring international protocol – and you’d be right. But don’t worry (and here’s the punchline), the Pentagon thought about it and as it turns out, the fragmenting ammunition rule doesn’t “make much sense”, so much like territorial sovereignty in the Middle East, the US Army is free to ignore it:

“There’s a myth that [expanding/fragmenting bullets] are prohibited in international armed conflict, but that doesn’t make any sense now” – Richard Jackson, special assistant to the Army Judge Advocate General for Law of War