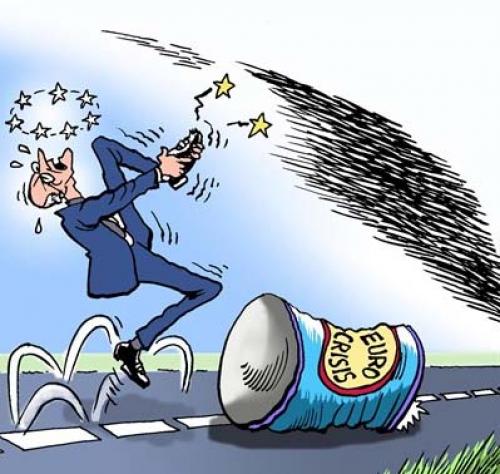 – Eurogroup In Shock: Finance Ministers “Would Not Know What To Discuss” After Greferendum Stunner (ZeroHedge, July 5, 2015):

Just out from Reuters:

There are no plans for an emergency meeting of euro zone finance ministers on Greece on Monday after Greeks voted overwhelmingly to reject the terms of a bailout deal with international creditors, a euro zone official said on Sunday.

Asked whether a meeting of the Eurogroup was planned for Monday, the official, speaking on condition of anonymity, told Reuters: “No way. (The ministers) would not know what to discuss.”

May we suggest containing the fallout, whether in capital markets or in the resurgent mood in the other PIIGS, as a primary topic?

And meanwhile, while we symptahize with the Greeks officially telling the Troika to “fuck off”, they may have other liquidity problems of their own.

Greece’s government shut banks and imposed capital controls a week ago to prevent the country’s banks from collapsing under the weight of mass withdrawals.

Deputy Finance Minister Nadia Valavani told Alpha TV that, as part of those measures, the government and banks had agreed at the time that people would also not be allowed to withdraw cash from safe deposit boxes.

Surely the Greeks bought enough gold and/or bittcoin ahead of this outcome. Surely

4 thoughts on “Eurogroup In Shock: Finance Ministers “Would Not Know What To Discuss” After Greferendum Stunner”