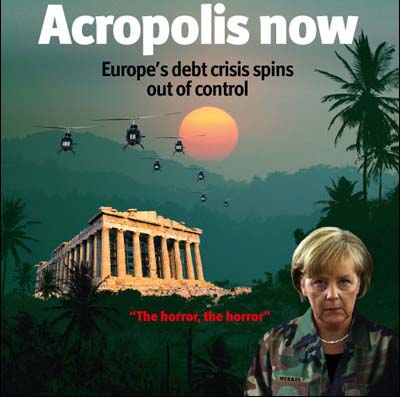 As we said earlier today, following today’s dramatic referendum result the Greeks may have burned all symbolic bridges with the Eurozone. However, there still is one key link: the insolvent Greek banks’ reliance on the ECB’s goodwill via the ELA. While we have explained countless times that even a modest ELA collateral haircut would lead to prompt depositor bail-ins, here is DB’s George Saravelos with a simplified version of the potential worst case for Greece in the coming days:

The ECB is scheduled to meet tomorrow morning to decide on ELA policy. An outright suspension would effectively put the banking system into immediate resolution and would be a step closer to Eurozone exit. All outstanding Greek bank ELA liquidity (and hence deposits) would become immediately due and payable to the Bank of Greece. The maintenance of ELA at the existing level is the most likely outcome, at least until the European political reaction has materialized. This will in any case materially increase the pressure on the economy in coming days.

All of which of course, is meant to suggest that there is no formal way to expel Greece from the Euro and only a slow (or not so slow) economic and financial collapse of Greece is what the Troika and ECB have left as a negotiating card.

However, this cuts both ways, because while Greece and the ECB may be on the verge of a terminal fall out, Greece still has something of great value: a Euro printing press.

It may not get to there: according to Telegraph’s Ambrose Evans Pritchard who quotes what appears to be a direct quote to him from Yanis Varoufakis, Greece will, “If necessary… issue parallel liquidity and California-style IOU’s, in an electronic form. We should have done it a week ago.”

California issued temporary coupons to pay bills to contractors when liquidity seized up after the Lehman crisis in 2008. Mr Varoufakis insists that this is not be a prelude to Grexit but a legal action within the inviolable sanctity of monetary union.

In other words: part of the Eurozone… but not really using the Euro.

That’s not all, because depending just how aggressively the ECB escalates events with Athens, Greece may take it two even more “nuclear” steps further, first in the form of nationalizing the banks and second, by engaging in the terminal taboo of “irreversibility” printing the currency of which it is no longer a member!

Syriza sources say the Greek ministry of finance is examining options to take direct control of the banking system if need be rather than accept a draconian seizure of depositor savings – reportedly a ‘bail-in’ above a threshhold of €8,000 – and to prevent any banks being shut down on the orders of the ECB.

Government officials recognize that this would lead to an unprecedented rift with the EU authorities. But Syriza’s attitude at this stage is that their only defence against a hegemonic power is to fight guerrilla warfare.

Hardliners within the party – though not Mr Varoufakis – are demanding the head of governor Stournaras, a holdover appointee from the past conservative government.

They want a new team installed, one that is willing to draw on the central bank’s secret reserves, and to take the provocative step in extremis of creating euros.

“The first thing we must do is take away the keys to his office. We have to restore stability to the system, with or without the help of the ECB. We have the capacity to print €20 notes,” said one.

Such action would require invoking national emergency powers – by decree – and “requisitioning” the Bank of Greece for several months. Officials say these steps would have to be accompanied by an appeal to the European Court: both to assert legality under crisis provisions of the Lisbon Treaty, and to sue the ECB for alleged “dereliction” of its treaty duty to maintain financial stability.

And who “unwittingly” unleashed all of this?

Mr Tsakalotos told the Telegraph that the creditors will find themselves be in a morally indefensible position if they refuse to listen to the voice of the Greek people, especially since the International Monetary Fund last week validated Syriza’s core claim that Greece’s debt cannot be repaid.

Recall last week we asked “Did The IMF Just Open Pandora’s Box?” We just got the answer. Our advice to Mme Lagarde: avoid stays at the Sofitel NYC for the next few weeks.

As for Europe: welcome to your own personal Lehman weekend. We hope you too enjoy making it all up as you go along, because you have officially entered the heart of monetary darkness.