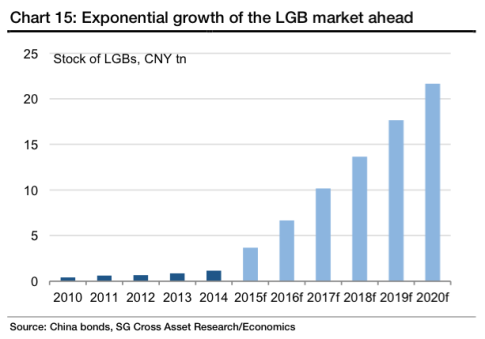 Last week we took an in-depth look at how China’s bewildering hodge-podge of hastily construed easing measures can’t seem to get out of their own way. Perhaps the most poignant example of this is how the country’s massive local government debt swap effort — which, as a reminder, aims to restructure a provincial government debt load that amounts to 35% of GDP — is effectively making it more difficult for the PBoC to keep a lid on rates, even as the central bank has embarked on a series of policy rate cuts, with the latest effort coming over the weekend. Here’s how we described the situation last week:

Or maybe more, according to Nomura, who estimates the burden may be closer to CNY23 trillion. As we saw on Monday, the PBoC has now effectively lost control — that is, the central bank’s latest policy rate cuts failed to arrest the rapid collapse in Chinese equity prices, meaning monetary policy in China, having long ago failed to shore up the decelerating economy, is now utterly ineffective at propping up stock prices as well.

Despite it all, China will likely continue to cut benchmark lending rates and RRR rates over the course of the next six months in a futile attempt to avert an economic and financial market collapse. In the end, the only recourse will be ZIRP and ultimately QE, just as we predicted some four months ago.

Consider all of the above, and then consider the following chart from SocGen which shows the projected supply for local government bond issuance in China. If the new muni bonds issued as part of the debt swap program are effectively treasury bonds — as Citi contends — then ask yourself the following question: how effective can benchmark rate cuts possibly be in terms of keeping a lid on rates with CNY20 trillion in new supply of what are effectively treasury bonds flooding the market? The answer is “not very effective,” which means that someone will need to soak up that supply directly. Enter Chinese QE.