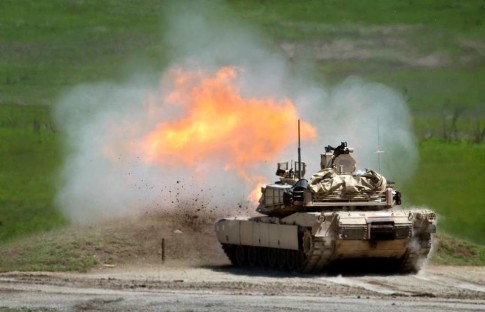 For more than a decade, troops here have been schooled in counterinsurgency.

Now, after a pair of mission-specific wars, an Army in transition aims to get back to the future.

The training needed to fight full-scale, more conventional battles has suffered, Army leaders contend. So Fort Riley is putting soldiers such as Staff Sgt. Gilbert Monroe back into big tanks and simulating wars on a scale grander than Iraq or Afghanistan.

“This is what I signed up for,” Monroe said.

He began his military career 14 years ago in an M1 Abrams tank. But he spent tours in Iraq commanding more nimble armored vehicles, rolling on eight tires and lacking the heft to blast a target from 2 miles out.

With Americans on Memorial Day weekend still assessing what was gained from fighting two drawn-out conflicts at the same time, are they ready to start thinking about the next war — maybe even The Big One?

“You hope it wouldn’t be World War III, but you have to prepare for the worst,” said Lt. Gen. Robert B. Brown, commanding general of the Army’s Combined Arms Center at Fort Leavenworth. “We need to be ready to play against the pro teams, not just the amateurs.”

By that he means a nation such as North Korea, even Russia. A “pro team” could even be a band of radicals with the means to acquire nationlike resources in a hurry — such as those fighters who call themselves the Islamic State, recruiting through the global reach of the Web.

In Army-speak, the training needed to fight that brand of enemy is shifting away from “mission-specific” toward “decisive action.”

And that requires the reacquainting of soldiers with epic battle plans featuring tanks, surface-to-air missiles, Apache choppers and military precision exercised over a broad and rugged terrain.

“It’s a paradigm shift for the Army,” Livsey said. “With Iraq and Afghanistan, it was all about COIN — counterinsurgency. We still need to train for that. But we also have to get back to bread-and-butter skills such as precise artillery, precise gunnery.”

At a time when U.S. military action has become defined by targeted airstrikes, ships jockeying in the South China Sea and a reluctance to place boots on the ground, the Army is seeking to reassert itself on the strategic stage, experts say.

Now facing steep troop reductions planned by the Pentagon, “the Army really is looking for a strategic framework in which to remain relevant,” said Kelley Sayler of the Center for a New American Security, an independent research organization.

“And you do need to train for the prospect of an epic war, even if there’s a low likelihood of it happening,” Sayler said. “You don’t want battlefield skills to atrophy.”

“You have to prepare for the full spectrum,” she said.

Generations of U.S. military planners have gravely miscalculated that the next war would be like the last, Bensahel said.

“You just don’t know what the next conflict will entail.”

Don’t think of the activities at Fort Riley as training for a “conventional” war, said Brown of the Combined Arms Center.

“A nation-state fighting against another nation-state would be so complex these days, so unlike World War II, you could hardly make a comparison,” he said.

Future wars wouldn’t compare even with Operation Desert Storm, the 1991 land assault in which a multinational force drove Iraqi troops out of Kuwait. Brown said technological leaps since then, plus threats posed by cyberattackers, have transformed conventional battle plans.

“No enemy today would be stupid enough to allow us months and months to build up forces,” as was the case in Desert Storm, he said.

Home to the nation’s 1st Infantry Division, known as “The Big Red One,” the fort boasts more than 75,000 acres of deep-rooted grasslands that quickly rebound from the tank tracks, fires and other scars of mock battlefield maneuvers.

In combined-arms exercises slated for next month, “we’ll have a synchronization of artillery, aviation, howitzers, tanks … everything we’ve got,” said Maj. Steve Veves. His tank group fired at long-distance targets last week.

The Army’s National Training Center in the Mojave Desert has long been a site of intensive battlefield maneuvers for deploying troops. The military is shifting more of that training to home stations such as Fort Riley, and some of them have already been working on the new training.

Relying also on simulated training, Fort Riley this year became the first in the Army to use gaming software developed at Fort Leavenworth’s simulation laboratory. The software allows moving soldiers to become their own fighting avatars, surrounded by a virtual battleground they view through helmets.

“If a simulation is done correctly, it’ll take the brain about 15 seconds to adjust back. You walk out the door surprised: ‘Oh, I’m really in Kansas.’”

Indoor simulators helped Pfc. Christian McClure get down the mechanics of loading an Abrams tank.

“They help, but nothing can simulate like this does,” McClure said just before wedging into a real tank and practicing live action on the firing range.

Although many experts, including some top Pentagon brass, question the Army’s need for heavy tanks and howitzers for future conflicts, McClure and tank commander Monroe would rather be nowhere else in battle.

“You can always use a tank,” Monroe said. “And, unfortunately, there will always be wars to fight.”

Miles away from the erupting battleground, Fort Riley commanders can monitor live maneuvers and coordinate them with drills around the globe.

A beach landing in California, infantry moving through a crowded Asian city and sea support from somewhere else, all linked together, make for what Army officials call “the ultimate scrimmage” for the ultimate war.

Military analyst John Pike said troops trained in counterinsurgency ought to prepare for that war too.

“The Army has kicked down a lot of doors in the last dozen years,” said Pike of GlobalSecurity.org. “And North Korea could break out any minute.

“It’s a big world out there. … Best as I can tell, peace isn’t breaking out all over.”