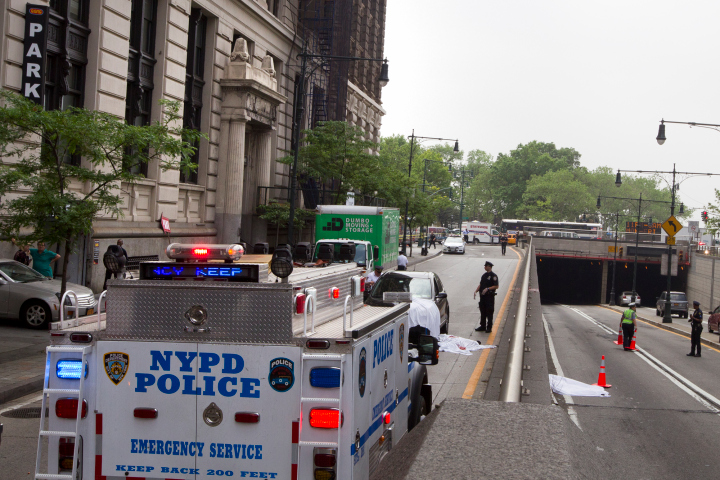 Yesterday, New Yorkers walking by the Ocean Luxury Rental apartment building at 1 West St around 10:40am, were greeted with a gruesome sight: a 29-year-old man had just jumped to his death from the 24th floor.

Battery Place near the Tunnel is jammed. Jumper down at 17 Battery Pl @NYPD on scene @NYDailyNewspic.twitter.com/jEa6zm8YD1

According to initial reports, the man landed on a car that was driving toward the Battery Tunnel at the time. He was pronounced DOA at the scene.

Today, we learn that the tragic incident was merely the latest banker suicide, when according to the NY Post the still unidentified jumper was the latest in a long series of investment bankers who have decided to take their own life.

The 29-year-old man, who has been identified as Thomas J Hughes, an associate at investment bank Moelis & Co., plunged from the 24th floor of the luxury Ocean apartment building at 1 West St. at about 10:40 a.m. and landed on a guardrail near the northbound Battery Park Underpass, narrowly missing a black SUV.

The man’s body was mangled by the impact, leaving one of the vehicle’s passengers horrified, witnesses said.

“I went outside, and the woman in the car was screaming, ‘I didn’t know where he came from!’ ” said Hans Peler, 48, a manager at the building’s parking garage. “It happened right in front of our guy who waves cars in with the flag. He was so shaken up, I told him to go home.”

A spokeswoman at Moelis & Company shared her condolences according to the Daily Mail: “We are saddened by the news of Tom’s death and send our sincere condolences to his family and friends at this very sad time. “Tom was a talented and valued team member and a positive force in our firm. He will be greatly missed.”

John Hughes, the father of the investment banker, said that he fears his son turned to drink and drugs to cope with the stress of work. He said Thomas had been under a ‘lot of pressure’ and that he even had to work on a recent holiday in the Bahamas, adding that his son was someone who “liked to work hard and liked to party” and feared that he found release in illegal drugs which turned him suicidal.

‘The only explanation is that I know he’s been working very hard and has been under a lot of pressure.

‘His work did not leave much time for enjoyment but that’s the nature of the assignment that he chose.

‘…at a time when he was under stress he probably resorted to illegal drugs, causing this incredibly poor judgement, is probably the best I can say.

‘He must have had some problems that I was not privy to.’

Tourists in a nearby open-air bus that was stuck in traffic, saw more than they bargained for when the gruesome scene unfolded right in front of them. Then they quickly found their bearing and realized the tragedy would look perfect on their Instagram profile, and scrambled for their cellphones to snap pictures of the body, said workers at the building.

“The head hit the railing . . . Half his head is on one side of the railing, half on the other,” recalled Frank Rodriguez, 44, a handyman who was working nearby. “It’s never worth this . . . Life is too precious.”

Sources said the young banker had made several attempts to kill himself earlier in the morning, including cutting his wrists, before making the plunge.

The man — whom police did not immediately identify — was from a wealthy family in Westchester County, sources said. He had apparently become very successful on his own.

He owned his apartment in the 36-story Ocean complex, which overlooks The Battery and New York Harbor, and had just returned from a vacation in the Bahamas, sources said.

At this point we have lost count of how many bankers have taken their own lives in the past year, despite stocks rising to all time highs and an artificial “wealth effecting” environment which if nobody else, benefits the banker class. We dread to think what happens to New York’s pavements once the central planners finally lose control.