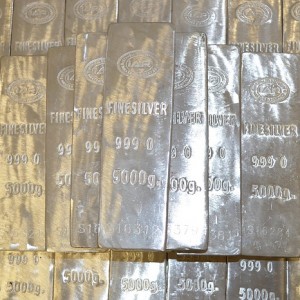 – Why Is JP Morgan Accumulating The Biggest Stockpile Of Physical Silver In History? (Economic Collapse, April 24, 2015):

During a time of crisis, investors tend to flood into physical gold and silver.  And as I mentioned just recently, JPMorgan Chase chairman and CEO Jamie Dimon recently stated that “there will be another crisis” in a letter to shareholders…

Some things never change — there will be another crisis, and its impact will be felt by the financial market.

The trigger to the next crisis will not be the same as the trigger to the last one – but there will be another crisis. Triggering events could be geopolitical (the 1973 Middle East crisis), a recession where the Fed rapidly increases interest rates (the 1980-1982 recession), a commodities price collapse (oil in the late 1980s), the commercial real estate crisis (in the early 1990s), the Asian crisis (in 1997), so-called “bubbles” (the 2000 Internet bubble and the 2008 mortgage/housing bubble), etc. While the past crises had different roots (you could spend a lot of time arguing the degree to which geopolitical, economic or purely financial factors caused each crisis), they generally had a strong effect across the financial markets

And Dimon is apparently putting his money where his mouth is.

If Dimon believes that another great crisis is coming, then it would make logical sense to stockpile huge amounts of precious metals.  And in particular, silver is a tremendous bargain for a variety of reasons.  Personally, I like gold, but I absolutely love silver – especially at the price it is at right now.

Over the past few years, JP Morgan has been voraciously buying up physical silver.  Nobody has ever seen anything quite like this ever before.  In fact, JP Morgan has added more than 8 million ounces of physical silver during the past couple of weeks alone.  The following is an extended excerpt from a recent article by Mac Slavo…

According to a detailed report from The Wealth Watchman JP Morgan Chase has been amassing a huge stockpile of physical silver, presumably in anticipation of a major liquidity event.

They’re baaaaack. Yes, “old faithful” is back at it again!

Of course, they never really left silver, and have been rigging it non-stop in the futures market, but for awhile there, there were at least no admissions of newly-stacked silver being made in their Comex warehousing facilities.

Yet, after a 16 month period of “dormancy” within their Comex warehouse vaults, these guys have returned with a vengeance.

In fact, our old buddies at JP Morgan Chase, not only see value in silver here, but they’re currently standing for delivery in their own house account in such strong numbers, that it commands our attention.  Let me show you what I mean.

Here’s a breakdown of the Comex’s most recent silver deliveries to JP Morgan:

This is a huge bout of deliveries in such a short space of time. In fact, within the realm of Comex world, it’s such an exceptionally large amount, that it even creates quite a spike on the long-term chart of JP Morgan’s vault stockpile: 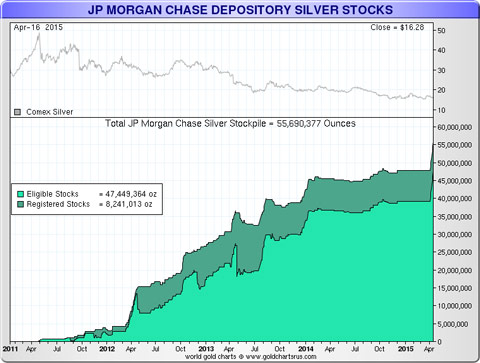 All in all, JP Morgan has added over 8.3 million ounces of additional silver in just the past 2 weeks alone.

So why is JP Morgan doing this?

Meanwhile, JP Morgan Chase has made another very curious move as well.  It is being reported that the bank is “restricting the use of cash” in some markets, and has even gone so far as to “prohibit the storage of cash in safe deposit boxes”…

What is a surprise is how little notice the rollout of Chase’s new policy has received.  As of March, Chase began restricting the use of cash in selected markets, including  Greater Cleveland.  The new policy restricts borrowers from using cash to make payments on credit cards, mortgages, equity lines, and  auto loans.  Chase even goes as far as to prohibit the storage of cash in its safe deposit boxes .  In a letter to its customers dated April 1, 2015 pertaining to its “Updated Safe Deposit Box Lease Agreement,”  one of the highlighted items reads:  “You agree not to store any cash or coins other than those found to have a collectible value.”  Whether or not this pertains to gold and silver coins with no numismatic value is not explained.

What in the world is that all about?

Why is JP Morgan suddenly so negative about cash?

I think that there is a whole lot more going on behind the scenes than we are being told.

JP Morgan Chase is the largest of the six “too big to fail” banks in the United States.  The total amount of assets that JP Morgan Chase controls is roughly equal to the GDP of the entire British economy.  This is an institution that is immensely powerful and that has very deep ties to the U.S. government.

Could it be possible that JP Morgan Chase is anticipating another great economic crisis?

We are definitely due for one.  Just consider the following chart from Zero Hedge.  It postulates that our financial system is ready for another “7.5 year itch”… 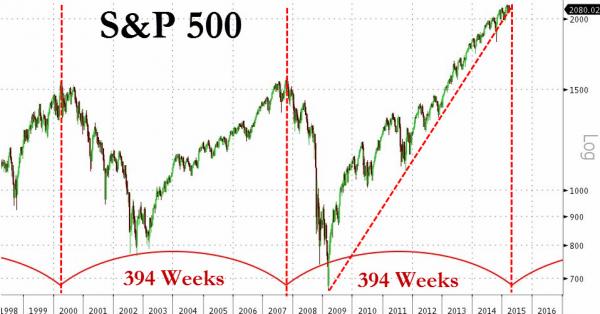 JP Morgan certainly seems to be preparing for a worst case scenario.

Are you getting ready for what is coming?

2 thoughts on “Why Is JPMorgan Accumulating The Biggest Stockpile Of Physical Silver In History?”