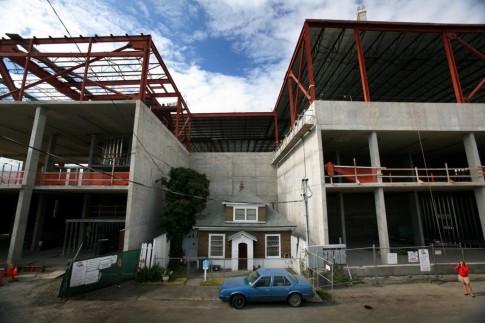 Edith Macefield’s Seattle home, photographed in 2008 as a commercial complex was under construction all around the house. (Joshua Trujillo/Seattle Post-Intelligencer/AP)

– Developers Forced To Build Mall Around Elderly Woman’s Home – Now Known As The “UP” House And Has Huge Following Of Supporters. (Refreshing News, April 26, 2015):

It seems like a familiar story: An elderly homeowner defiantly stands up to money-hungry developers who want to tear down her sweet little house.

But that’s not exactly what happened with octogenarian Edith Macefield, said her friend Barry Martin.

Macefield had a simple plan: To live out her life in the Seattle house she knew so well, not in some strange nursing home. She wanted to stay so badly that she reportedly turned down $1 million to move; then, she watched as buildings cropped up all around her humble abode.

“I don’t want to move. I don’t need the money,” Macefield told the Seattle Post-Intelligencer in 2007. “Money doesn’t mean anything.”

Macefield lived in the home until her death in 2008 at the age of 86. Her house, mostly vacant and exposed to the elements since, is now up for sale, with a buyer to be decided this week, said listing agent Paul Thomas. He reported receiving 38 “solid offers” for the 600-square-foot bungalow.

Although the structure will likely have to be bulldozed, the winning bidder will need to somehow memorialize Macefield — an idea that came to Thomas as he was preparing the home for sale. Passersby would stop and tell him about the house and its significance. He mentioned that to the seller, who agreed to include the requirement.
The Macefield house this week. (Paul Thomas/NoBSBroker.com) The Macefield house, photographed this week. (Paul Thomas/NoBSBroker.com)

“It became clearly quickly that this is not a normal house,” Thomas said. “This place has a lot of meaning for a lot of people.”

The legend of Edith Macefield has captivated people in Seattle’s Ballard neighborhood and beyond. Balloons have been posted all around the house, which bears a striking resemblance to the one in the Pixar movie “Up.”

Pixar representatives have said the animated film’s house wasn’t based on a real one. But people have been calling Macefield’s home the “Up” house since the movie’s 2009 release.

A Ballard music festival was named after Macefield, and a local tattoo parlor has inked a likeness of the home — along with the word “steadfastness” — on a number of people’s bodies.

“Part of what makes people so attracted to this house is feeling so frustrated with seeing one after another after another homeowner selling to developers, and developers bulldozing the houses and the character of the place changing,” Thomas, the listing agent, told The Post.

The house dates back to the early 1900s, and all that’s left of the original structure is the roof and sub-floor, Thomas said. Work on a retail development began while Macefield still lived in the home, and cement walls now surround the structure on three sides.

Macefield bought the house decades ago and lived in Europe while her mother occupied the Seattle home. She moved back. Her mother died.

Then, the developers came knocking. But Macefield had no interest in moving, said Martin.

Macefield became a neighborhood fixture. Her little blue car sat curbside. She played her music loudly. “I went through World War II; the noise doesn’t bother me,” she told the Seattle paper about the construction project surrounded her. “They’ll get it done someday.”

While she had a reputation for being a bit cranky, Macefield befriended a number of the people working on the project engulfing her home — particularly Martin, the construction superintendent. “From all the stories I had heard, I expected her to be angry or whatever,” he recalled this week. “But she was actually pleased and excited for there to be activity around there.”

And it wasn’t that she was mean, Martin said; she just had defense mechanisms. You had to earn her trust.

That’s what Martin ended up doing over time. It began with a hello, and soon he was driving Macefield to hair and doctor appointments, and buying her groceries and cooking her meals.

Martin said Macefield “was afraid to death to go to an old folks’ home.” She told him that her mother had gone to live in one, and that the conditions were deplorable, so Macefield moved her back to the small house. Her mother died the next day.

“That was one of her deals: She wanted to die on the couch where he mother did,” Martin said. “And I thought, well, that’s a really simple request and there isn’t any reason why somebody shouldn’t be able to have that kind of request.”

Martin did what he could to help Macefield stay in the house, even though his job involved constructing the towering development around her.

In the end, Macefield willed her house to Martin. By 2009, he had finally emptied and sold it for $310,000 to a different developer, who promised to elevate the home and build a park underneath. That project — “a scheme” — went bust and most of the investments were lost, said Thomas, the listing agent.

The house went to a foreclosure auction earlier this year and failed to attract bidders. It has since been listed for sale with no asking price; since the residential zoning has lapsed, it will most likely become the site of a business, Thomas said.

The winning bidder will be chosen based on a variety of factors, Thomas said, including the dollar amount offered, the proposed terms of the sale and the memorial plans.

Macefield was never one for attention, despite how much of it landed on her doorstep. Martin said she once ran off a CBS reporter who wanted an interview. “She actually swore at him,” Martin recalled.

Her refusal to move wasn’t about self-promotion, but rather self-determination. Who knows how she would have felt about a public memorial.

“To be honest,” Martin said, “I almost don’t think she would care about there being one.”

1 thought on “Developers Forced To Build Mall Around Elderly Woman’s Home – Now Known As The “UP” House And Has Huge Following Of Supporters.”