– Stunned Greeks React To Initial Capital Controls And The “Decree To Confiscate Reserves”, And They Are Not Happy (ZeroHedge, April 20, 2015):

Earlier today, following weeks of speculation, Greece finally launched the first shot across the bow of capital controls, when it decreed that due to an “extremely urgent and unforeseen need” (ironically the need was quite foreseen since about 2010, but that is a different story), it would be “obliged” to transfer – as in confiscate – “idle cash reserves” located across the country’s local governments (i.e., various cities and municipalities) to the Greek central bank.

Several hours later the decree which was posted in the government gazette has finally percolated among the population, and the response to what even ordinary Greeks realize is now the endgame, is less than exuberant.

Bloomberg reports, that “as Greece struggles to find cash to stay afloat, local authorities say they oppose a government decision to use their reserves for short-term financing.”

“The government’s decision to seize our reserves not only raises legal and constitutional issues, but also a moral one,” said George Papanikolaou, mayor of Glyfada, the third-largest municipality in the metropolitan region of Attica after Athens and Piraeus. “We have a responsibility to serve our citizens,” Papanikolaou said by phone on Monday. Glyfada has about 16 million euros in cash reserves, he said.

George is unhappy because as recently as tomorrow, he will find there is precisely zero euros in his public bank account, as all the money has now been forcibly sequestered by the government in order to repay future Troika, pardon, IMF obligations.

Sadly for Greece, this is the only option left as the money has now fully run out: Greek Prime Minister Alexis Tsipras ordered local governments and central government entities to move their cash balances to the central bank for investment in short-term state debt.

The decree to confiscate reserves held in commercial banks and transfer them to the Bank of Greece could raise as much as 2 billion euros ($2.15 billion), according to two people familiar with the decision. The money is needed to pay salaries and pensions at the end of the month, the people said.

“It is a politically and institutionally unacceptable decision,” Giorgos Patoulis, mayor of the city of Marousi and president of the Central Union of Municipalities and Communities of Greece, said in a statement on Monday.“No government to date has dared to touch the money of municipalities.”

It took the radical leftist one all of 2 months since coming to power.

The Athens city council and the union of municipalities and communities in Greece will convene tomorrow to debate the order, a press officer of the mayor’s office said.

And once everyone realizes what just happened, expect the riot cam and the Greek Pay-Per-Riot channel, which has been on hiatus since the summer of 2012, to be fully reactivated. 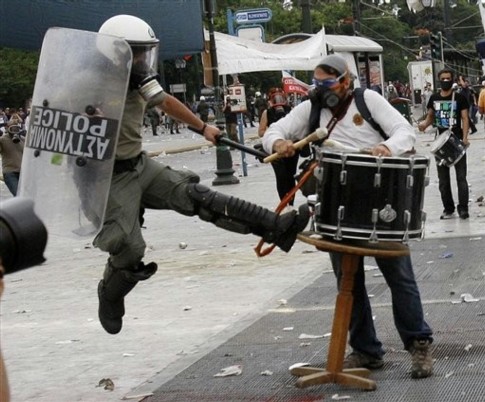 4 thoughts on “Stunned Greeks React To Initial Capital Controls And The ‘Decree To Confiscate Reserves’, And They Are Not Happy”