– The “Revolver Raid” Arrives: A Wave Of Shale Bankruptcies Has Just Been Unleashed (ZeroHedge, April 2, 2015):

Back in early 2007, just as the first cracks of the bursting housing and credit bubble were becoming visible, one of the primary harbingers of impending doom was banks slowly but surely yanking availability (aka “dry powder”) under secured revolving credit facilities to companies across America. This also was the first snowflake in what would ultimately become the lack of liquidity avalanche that swept away Lehman and AIG and unleashed the biggest bailout of capitalism in history. Back then, analysts had a pet name for banks calling CFOs and telling them “so sorry, but your secured credit availability has been cut by 50%, 75% or worse” – revolver raids.

Well, the infamous revolver raids are back. And unlike 7 years ago when they initially focused on retail companies as a result of the collapse in consumption burdened by trillions in debt, it should come as no surprise this time the sector hit first and foremost is energy, whose “borrowing availability” just went poof as a result of the very much collapse in oil prices.

As Bloomberg reports, “lenders are preparing to cut the credit lines to a group of junk-rated shale oil companies by as much as 30 percent in the coming days, dealing another blow as they struggle with a slump in crude prices, according to people familiar with the matter.

Sabine Oil & Gas Corp. became one of the first companies to warn investors that it faces a cash shortage from a reduced credit line, saying Tuesday that it raises “substantial doubt” about the company’s ability to continue as a going concern.

It’s going to get worse: “About 10 firms are having trouble finding backup financing, said the people familiar with the matter, who asked not to be named because the information hasn’t been announced.”

Why now? Bloomberg explains that “April is a crucial month for the industry because it’s when lenders are due to recalculate the value of properties that energy companies staked as loan collateral. With those assets in decline along with oil prices, banks are preparing to cut the amount they’re willing to lend. And that will only squeeze companies’ ability to produce more oil.

Those loans are typically reset in April and October based on the average price of oil over the previous 12 months. That measure has dropped to about $80, down from $99 when credit lines were last reset.

That represents billions of dollars in reduced funding for dozens of companies that relied on debt to fund drilling operations in U.S. shale basins, according to data compiled by Bloomberg.

As warned here months ago, now that shale companies having exhausted their ZIRP reserves which are largely unsecured funding, it means that once the secured capital crunch arrives – as it now has – it is truly game over, and it is just a matter of months if not weeks before the current stakeholders hand over the keys to the building, or oil well as the case may be, over to either the secured lenders or bondholders.

The good news is that unlike almost a decade ago, this time the news of impending corporate doom will come nearly in real time: “Publicly traded firms are required to disclose such news to investors within four business days, under U.S. Securities and Exchange Commission rules. Some of the companies facing liquidity shortfalls will also disclose that they have fully drawn down their revolving credit lines like Sabine, according to one of the people.”

Speaking of Sabine, its day of reckoning has arrived

Sabine, the Houston-based exploration and production company that merged with Forest Oil Corp. last year, told investors Tuesday that it’s at risk of defaulting on $2 billion of loans and other debt if its banks don’t grant a waiver.

Another company is Samson Resource, which said in a filing on Tuesday that it might have to file for a Chapter 11 bankruptcy protection if the company is unable to refinance its debt obligations. And unless oil soars in the coming days, it won’t.

Its borrowing base may be reduced due to weak oil and gas prices, requiring the company to repay a portion of its credit line, according to a regulatory filing on Tuesday. That could “result in an event of default,” Tulsa, Oklahoma-based Samson said in the filing.

Indicatively, Samson Resources, which was acquired in a $7.2-billion deal in 2011 by a team of investors led by KKR & Co, had a total debt of $3.9 billion as of Dec. 31. It is unlikely that its sponsors will agree to throw in more good money after bad in hopes of delaying the inevitable.

The revolver raids explian the surge in equity and bond issuance seen in recent weeks:

Many producers have been raising money in recent weeks in anticipation of the credit squeeze, selling shares or raising longer-term debt in the form of junk bonds or loans.

Energy companies issued more than $11 billion in stock in the first quarter, more than 10 times the amount from the first three months of last year, Bloomberg data show. That’s the fastest pace in more than a decade.

Unfortunately, absent an increase in the all important price of oil, at this point any incremental dollar thrown at US shale companies is a dollar that will never be repaid.

Finally, speaking of Samson, its imminent bankruptcy should not come as a surprise. Back in January we laid out the shale companies which will file for bankruptcy first. The recent KKR LBO was one of them. 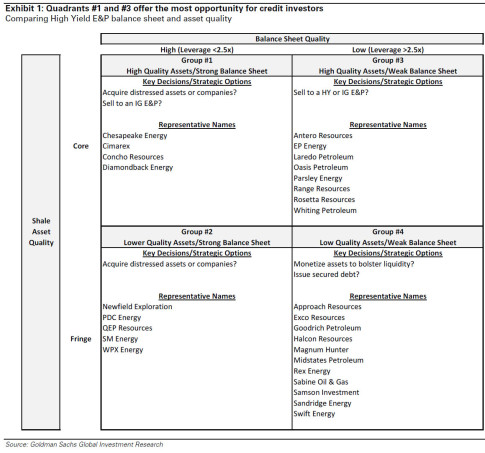 Many more to come as the countdown to the day of reckoning for the US shale sector has just about run out.